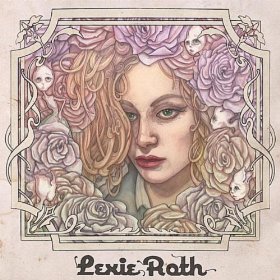 Musical legacy can be a heavy weight; it can also be a blessing.  Lexie Roth, daughter of famed guitarist Arlen Roth and visual artist Deborah Bussichio, comes from a line of artistically inclined folk.  Roth shows the same bent on her debut album, Lexie Roth.  While the apple does not fall far from the tree, so to speak, it’s clear that Roth is still growing into her own style and substance as a songwriter.

Roth opens with the vaguely surf-influenced mellow rock of “Lost Memory”.  There’s a pervading sense of melancholy that walks its way through the open arrangement, which serves as a platter on which Lexie Roth’s fine alto voice can play.  The subtle musical style used here is somewhat reminiscent of Sting’s post-jazz age.  “Stay Or Go” is a musical diary entry; wordy and self-absorbed.  The arrangement is solid, but the vocal line is overly repetitive and trapped in its own ambivalence.  “Forget All About Me” has a more ethereal melancholy at its core.  The sparse arrangement once again allows for Roth’s voice to be the star of the show, but the plodding melody doesn’t necessarily do her any favors.

“Ghost Of Childhood” starts slowly and spins in place until Roth launches into an exceptional chorus.  “I Have To Leave You” keeps up the maudlin pace, with Roth perseverating on a failing relationship in a clockwork arrangement that lulls the listener to sleep.  Things pick up a bit on “Little One”, offering up a chorus that is full of quiet energy and a solid hook.  The song flutters and flails a bit on the verses, caught up in wordy style, but the chorus is right on the mark.  “I Wanna Run” considers a relationship she has given her all to, only to find out her beloved isn’t as committed as she.  Roth’s story telling here is solid enough, but the story is almost clinically told; there’s no real sense of emotion one way or the other.

“Call You My Hon” is a love song that’s awash in sound but once again leaves any distinct sense of emotion at the door. It’s a solid tune, but undersold.  Roth lays her heart bare on “I’ll Be”, a love song with an apocalyptic feel.  It’s unclear whether this number is written from beyond a relationship or beyond the grave, but Roth’s obsessively verbose style is a bit too much in spite of the compelling theme.  A mild swing informs the rhythm of “Windfield”, an expansive story in song that suffers from its own lack of energy and Roth’s prolixity.  The aural palate used here is actually quite enjoyable, and renews the earlier comparison to some of Sting’s work, but the song just folders under its own monotony.  Roth shakes off her doldrums with the snarky/sweet “Country Diddy”.  She keeps it simple here while wallowing in her own near-demise, recovery and short-sighted romantic failings.  It’s an interesting closer that is very much out of tone with the rest of the album.

Lexie Roth brings an intriguing voice on her self-titled debut album, but has yet to learn the economy of a seasoned singer/songwriter/storyteller.  The album suffers from a relentless inertia of low-key, plodding songs full of self-directed and overly populated lyrics.  These, alongside Roth’s low-key vocal style, do not serve her well.  Roth’s voice is sufficient to sustain the listener in spite of all this, but it’s hard not to think that there is more life in Roth as both a songwriter and performer.