Red Jacket Mine - Someone Else's Cake 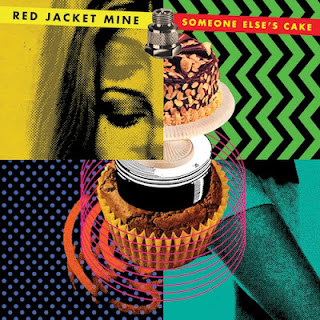 
Red Jacket Mine takes off with the delicious, synth-driven pop/rock of “Amy”.  Infectious hooks and s sneaky-catchy chorus make this one a charmer and a great opening track.  “Nickel & Dine” is a catchy Americana rocker that sounds like a cross between Elvis Costello and Blue Rodeo.  Red Jacket Mine builds a wonderfully catchy vibe here while discussing the human tendency to tear down anything that works and the clash between optimism and pessimism.  “Ron Nasty” is a bit generic, but “Engineer” rocks with a bluesy attitude.  This is one of those tunes you just can’t sit still for, and vocalist Lincoln Barr is in particularly fine form here.
“Skint City” has a more melancholy feel, and carries a vocal harmony that’s reminiscent of a 1970’s Eagles record.  It’s a solid album track with a quiet swing that’s easy on the ears.  “Listen Up (If the World Is Going to Hell)” pays homage to 1970’s R&B and pop styles.  Barr sounds a bit strained in small moments here, but it’s a solid effort overall.  “Novelty’s Gone” walks the line between gentle rock and country, relying on a metronomic rhythm to drive a maudlin number about the reality of a relationship setting in.  There’s a rote feel to this tune that carries over to the tacitly soulful “Better To Be Broken Than Blind”.  Both tunes are solid enough, but just don’t carry much energy or conviction.


Red Jacket Mine comes fully awake for “Someone Else’s Cake”, a catchy kiss-off song of sorts.  There’s a delicious edge to this number that underscores the Americana/Country sound.  “Have You Got A Permit To Preach On This Corner” has more of a classic country sound, and takes to task someone who professes their beliefs publicly.  Red Jacket Mine closes with the catchy rocker “Bellar & Bawl”.  An R&B backbeat drives the song, alongside an early rock & roll piano style and a band that is clicking on all eight cylinders.  This is the perfect close to the album, and a perfect song to close shows with as well.
Red Jacket Mine certainly knows how to kick things into high gear when they want to, but Someone Else’s Cake shows a supple understanding of song craft that while not always perfect in fruition, displays a distinctive understanding of melody, song structure and inspiration.  Someone Else’s Cake is a complex album that finds lead singer/songwriter Lincoln Barr negotiating with his own varied musical influences with varying degrees of success.  It’s an intriguing listen from a band who promises to keep growing and getting better with age.