The White Ravens - Saddle Up The Whales 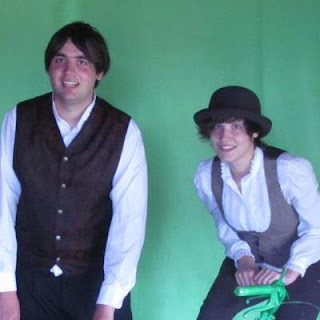 Brother and sister songwriting team Will and Amy Bennett began their band, The White Ravens, on Christmas Day, 2004.  Now 19 and 20, respectively, The Bennetts are carving out an interesting niche in the Indie rock scene in Michigan.  Terming their sound “indie pop geek cabaret rock”, The White Ravens are influenced by a cacophony of sounds from the worlds of rock, classical, Broadway, folk and modern Indie rock.  Will Bennett (keys, guitar) is the composer, and Amy Bennett (vocals, bass) is the lyricist.  It’s a dynamic combination that is responsible for a wonderful tuneful, effervescent pop/rock sound.  On their third album, Saddle Up The Whales, The White Ravens seem to have finally come into their own.

The opening track, “Saddle Up The Whales” is vibrant; joyous; a little bit messy and a whole lot of fun.  Rather than the cynicism so common in modern popular music, The White Ravens glory in a sort of youthful glee.  The result is a sound that is complex, but driven by a singular pop sensibility that gets under your skin and makes you want to get up and dance. “Rube Goldberg Machine” features the same sort of simple joy, wrapped up in an incredibly complex and varying arrangement.  Will Bennett shows his compositional skills run somewhere between those of the Beatles and Ben Folds, blending rock, pop and classical components into an amazingly cogent bit of writing.  Amy Bennett backs it all up with lyrics that are wonderfully twisted and full of the simply joy of making music.

“Informational Video” takes a disco beat and turns it into a complex, layered pop song.  You’ll want to dance and sing along.  “Conspiracy” is a paranoia-filled nightmare for the relationship-phobic in the crowd.  There is a distinct cabaret-pop feel to this tune, and Amy Bennett perfectly balances an edge of sultry songstress with quirk and humor.  The White Ravens offer up a change of pace with “Rain Song”.  Sounding at first like a ballad, “Rain Song” is quirky and pensive, but carries a melody that is beautiful and sweet.  Amy Bennett handles this juxtaposition with a surprising grace.  “Spaaace” is a catchy piano-driven rocker full of classical themes and a fearful penchant for space travel.  The song is infectiously off-kilter; the sort you return to again and again.

“Mechanical Whales” starts out with a dark cloud hanging over it, brought on by the delicious minor key piano opening.  This turns into an art-rock extravaganza that is more about sound and structure than anything else.  The result is stark and full of a surprisingly twisted beauty.  “World’s Smallest Piece Of Pasta” has more of a chic-dance rock aesthetic.  The quirk factor here is quite high, and the song is an entertaining if surreal listen.  “Great Pacific Garbage Patch” commemorates the world’s eighth continent, a large collection of garbage afloat in the Pacific Ocean.  This tune has great comedic potential, but The White Ravens find a gentler path through the song.  “Arlene’s Grocery” is full of wonderfully zany lyrics.  The arrangement matches the feel but is complex and well-developed.  “We’re Glad You’re Here” is a Beatles-esque musical exploration full of layered sounds ala Phil Specter.  It’s a nice sonic segue way into the closing track, a boogie-woogie take on “Bye Bye Blackbird”.  Will Bennett gets to show off his piano prowess here in unvarnished terms, and Amy Bennett shows depth and grace in her handling of the vocal line.

The White Ravens keep you on your toes and ultimately charm your socks off on Saddle Up The Whales.  The musical depth and breadth of what they are doing here before legal drinking age speaks to a pair of distinctive musical talents, and a special chemistry that simply doesn’t come along every day.  Saddle Up The Whales has a kitschy feel at times, but it’s all in good fun; a fun so infectious you can’t help but join in.

Learn more at www.thewhiteravens.com.
Posted by Wildy at 5:00 AM

Labels: Amy Bennett, Ben Folds, No Doubt, Sarah Slean, Tally Hall, The Beatles, The White Ravens, They Might Be Giants, Will Bennett