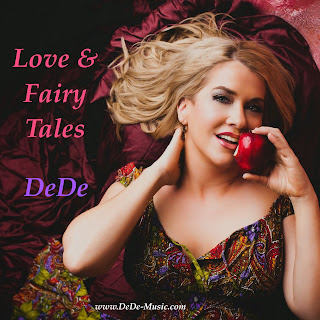 DeDe – Love & Fairytales
2013, Diva Prince Publications
Deborah “DeDe” Wedekind is an ever growing rarity in popular music: she makes true adult contemporary music.  With a lyric pop voice that’s as nigh to perfect as one can find, and a gentle pop songwriter’s touch, DeDe wraps her songs around you like a warm stole on a winter’s night.  DeDe’s latest EP, Love & Fairytales, sounds like a cross between Adele and Amy Grant during her Top-40 years.  Through it all, listeners are treated to a mature outlook, a sweet and warm voice, and lightly inflected pop song craft that gets under your skin with a subtlety that’s deft and surprising.
DeDe opens with “Blame It on the Summertime”, a swaying waltz that sneaks up on you with a story of love.  DeDe shows off perfect tone in a gentle and lyric melody that shines with its own internal energy.  In the process she manages to dance on the edge of cliché without ever quite falling in.  “The Fairy Tale Song” is all about finding your dreams/purpose and making them happen.  Against the backdrop of favored childhood fairy tale characters, DeDe evokes a carpe diem approach that steps out of the usual script and embraces both the good and bad that life throws your way.  This is all done to a snappy little pop arrangement that is catchy yet refined.  “The Plans I Have for You” is an open letter in music written from the perspective of God.  DeDe skips over any sense of specific religion and delivers a universal image of God that can fit into most any religious construct.  It’s a beautiful song that is personal and yet stretches across the usual ethnic and religious bounds that religion tends to get caught in.
“Just Desserts” is a rocking little country revenge song where DeDe dresses down a perfect companion that carries perhaps a little too much self-satisfaction to be entirely genuine.  Schadenfreude over the concept of what goes around comes around is the driving factor, and there’s a bit more vitriol here than one might expect.  The song is well written however, and likely represents DeDe’s best shot on the EP for major distribution.  DeDe winds down with the classical leanings of “We’ll Never Part”; she handles the vocals well enough, but doesn’t seem quite as comfortable in this setting.  The languid waltz here is an unfortunate choice, dragging the song along without much energy.  The result is a supposedly happy love song that sounds more melancholy than anything else.
DeDe Wedekind has the sort of voice people will line up to hear, even if her material consisted of names from the local phonebook.  Luckily the material on Love & Fairytales is much more accomplished, and DeDe handles everything with a sound tonally and stylistically flawless.  If there is a crack here it is the overly controlled style of production on the EP.  One guesses that DeDe is something of a perfectionist, and each song here is honed to a gem-like sheen.  With that voice, however, DeDe may be better served by finding a more raw quality to the recordings.  This would build a sonic depth into arrangements that are sometimes pretty and polished, but acoustically shallow.  This is perhaps a picky point, but it will make the difference between solid appreciation by the listener and a true connection that brings them back again and again.
Rating: 3 Stars (Out of 5)
Learn more at www.dede-music.com.