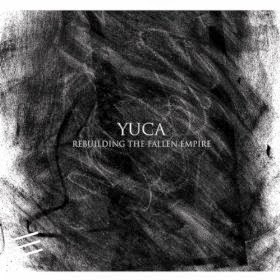 Langley, British Columbia rockers YUCA don’t follow the typical formula for rock and roll success.  High minded and wide open arrangements are the order of the day on their second full-length album Rebuilding The Empire.  The band has a love for all things U2, or so you would gather from their sound, which is at times derivative but very commercial.  Rebuilding The Empire finds lead vocalist Matt Borck stretching his voice to the limits, while the rest of the band struggles to find a sound that includes their innate ethereality and a sense of vitality.

YUCA launches out of the gate with "Skeletal Desires", adding a touch of Latin jazz flair to a hard-driving melodic arrangement with a slinky horn section.  "Melt" is a big, wide open commercial rock song predicated on minimalist verses and a bland arena style chorus. The saving grace of the song is Matt Borck's voice. "Maybe We'll Riot" suffers from its own ambiguity.  An energetic, neo-disco arrangement surrounds lyrics that are more speculative than anything else. "Heavy As A Stone" keeps up the highly refined sound and the almost detached lyrical air that has been evident thus far. The chorus of the song is dressed up on gorgeous vocal triads, but there is a decided lack of conviction in the performance.

"I'm Alive She Said" is a stadium churner done in the style of U2. Borck has the right sound, and the band presents the right approach, but the energy that turns this from ho hum to rattle and hum never materializes.   "Love" is a big skulking musical monster that tests the edges of Borck's voice. The song is all tension and no resolution, substituting drama for development.  YUCA gets personal on "Where Are My Soldiers At?"  The opening of the song is pretty and stripped down with a misty air, but this quickly resolves into a sort of cookie cutter adult rock arrangement.

"Anthem Of Need" tries to shake off the distance with an insistent bass-driven rhythm, and YUCA partially succeeds with a memorable chorus. Unfortunately the cookie cutter feel of the songwriting never subsides. "Give Up My Ghost" amps up the energy, but the bland, post adult rock sound continues in what should be a dynamic rock track. YUCA closes with "Sparrow", which starts out as a stripped down, ethereal number. It stays there, bathing a song of support in emotional melancholy.

YUCA mines the sound of bands such as U2 and Coldplay in trying to put forth their own band persona.  This ethereal, big rock sound is both enjoyable and frustrating as YUCA spends the time on Rebuilding The Empire making musical shadow animals when they should carving out their own niche.  The result is a well meant but hollow and derivative sound.  YUCA knows who they are trying to be, but it doesn’t seem like they know who they are yet.  That being said, there’s very solid musicianship here, and Matt Borck has a voice that can front a big time band. YUCA just needs to find that thing that makes the unique and bring it out in their music.