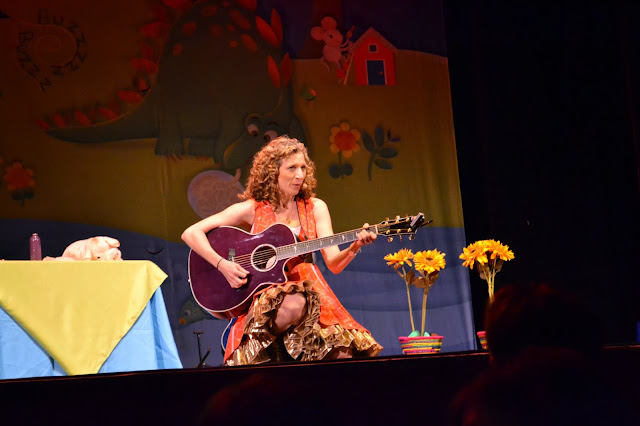 Laurie Berkner – Live at the State Theatre of Ithaca, Ithaca, New York – October 12, 2013
There is a reason that People Magazine once dubbed Laurie Berkner “The Queen of Children’s Music”.  When Berkner took the stage promptly at 12:00 PM, she did so without airs.  It took about five seconds into her first song, “Victor Vito”, for Berkner to connect with every one of the approximately 900 people in attendance, kids and parents alike.  Fast or slow, sentimental or fun, Berkner captivated the crowd during her one hour set.  Kids were dancing in the aisles and singing along as if their lives depended on it.
Once into her set, Berkner was alight with boundless energy, dancing, bouncing and running in place throughout an energetic collection of songs that span her career.  In spite of her frenetic stage presence, Berkner managed to sing with a voice that was entirely recognizable from her recordings.  No small feat, that, and particularly unusual in this day and age.  Playing without her usual band in a rare solo performance, Berkner was set free from the usual structure of her show and was therefore free to commune with the crowd.
Aside from Victor Vito, Berkner ran through songs such as “Five Days Old”, “Pig On Her Head”, “The Goldfish” and “I’m Gonna Catch You” with the flair of a veteran performer.  She knew her audience and they knew her; all pretenses washed away and the air was of a party of close friends.  Children bobbed, jumped, weaved, spun and danced with joy.  Their energy crossed the stage to Berkner, who gave it right back to her adoring fans.  By the time Berkner began to wind down with “Moon Moon Moon”, the younger kids in the crowd were starting to run out of gas.  That gentle lullaby was the breather everyone needed to recover for the closing stomp, “We Are The Dinosaurs”.
There are hosts of children’s performers out there with varying levels of song quality, on-stage execution and persona.  Berkner is head and shoulders above the rest in all three.  In spite of being elevated on the stage, she never sings down to her fans, and this the reason why you saw in the crowd some kids as old as their early teens.  Berkner is real and honest in her songwriting and in her love of the crowds that gather for her.  Kids know a phony when they see one, often before adults do, and there isn’t a phony bone in Berkner’s body.  She is a singer, songwriter and entertainer of the highest order, and a Laurie Berkner show is money well spent.  You could tell standing outside of the Ithaca State theater yesterday by all of the smiles on parent and children’s faces alike.
Laurie Berkner has upcoming dates in Connecticut, California, Michigan, Pennsylvania, New York and New Jersey throughout the remainder of 2013. Check out her concert calendar for dates, times and locations.  For more information on Laurie Berkner and her recordings, visit www.laurieberkner.com.  You can also support the KickStarter campaign for her upcoming album Lullabies
Set List
Victor Vito
Five Days Old
Rocketship Run
Bumblebee (Buzz, Buzz)
Pig On Her Head
Shake Your Body Down
The Goldfish
My Family
Mouse In My Toolbox (Facebook Request)
Medley: I Really Love To Dance, I’m Not Perfect, I Know A Chicken, I’m A Mess, Back The Cat Came Back, Boots, My Energy
Party Day
I’m Gonna Catch You
Under A Shady Tree
Moon Moon Moon
We Are The Dinosaurs 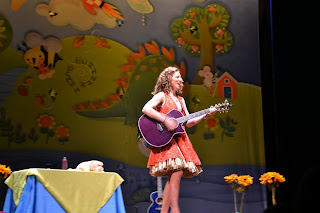