Gabriela Pepino - Let Me Do It 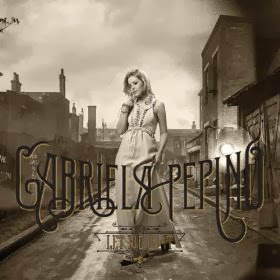 Gabriela Pepino - Let Me Do It
2012, Tratore Music Brasil
Berklee educated Brazilian pop/jazz singer Gabriela Pepino has a unique sound.  With a heavy tone and European air ala Edith Piaf, Pepino channels the sounds of American pop and soul music of the 1960’s, 70's and 80's, ala Taylor Dayne.  Her debut album, Let Me Do It, provides an ample introduction to an enigmatic and powerful performer with presence to match.
Pepino starts out with "Let Me Do It"; a slinky jazz number build around a snappy bass line. Pepino's tone is a bit heavy at times, but there is an unqualified beauty in her voice. "If I Lived In France" plays like a grade school essay set to music. The arrangement makes it interesting, and the vocal is sufficiently refined, but the lyrics don't match up to the performance. Pepino steps over into a 1970's pop singer/songwriter style for "My Dream Is You".  Pepino carries this off with a diva's panache, accentuated by a sparkling, string laden bridge. "Headache" gets a dose of Chicago (the band) style horns, and a soul infused arrangement. Pepino's heavy tone isn't as nimble in this setting.
"Dose of Scotch" heads back to jazz with a light swing that's airy and fun. Pepino's tone smatters annunciation at times, and the lyrical constructs are pedestrian at best. "Baby" is repetitive to the point of distraction, even wrapped as it is in a light and catchy arrangement. "I Don't Wanna Fight" is a solid 1970's piece of singer/songwriter pop. Pepino once again devolves into deep repetition at the end of the song, but this is otherwise a positive experience.  "Unexpected" is aptly name, a lithe little piano ballad hidden in the Alvin's belly that sounds like a cross between Elton John and Fiona Apple with a solid dose of soul worked on. Pepino shines here, selling the song as if the story were her very own.
Marina Machado joins Pepino on "Deepest Shadow", trading and sharing vocal lines with an appealing natural chemistry. "Change" and "I Can't Wait" are cut from the same 1970's soul/pop cloth, and set up the blues transition that occurs with "My Blues".  Pepino's voice is perfectly matched to the style and sound here as she takes a moment to shine.  Pepino heads into the home stretch with "Someone to Light up My Life", the sort of long and languorous track that exposes vocal weaknesses and puts them on display. There's no exception here, as Pepino's heavy tone is not supple enough to work through the melody line without calling attention to itself. It's a nice song but a poor song choice.   She closes the deal however with the sultry bebop of "I Just Wanna Make Love to You", in what turns out to be the high point of the album.
Gabriela Pepino is a talented vocalist with a unique sound.  Her voice lends itself more easily to certain styles and sounds than others, a lesson that was not fully learned when she recorded Let Me Do. The album is nonetheless a positive listening experience with a few bumps along the way.  Pepino has the sound and the force of personality to a major international force in music.  Song selection, as always, is the key.
Rating: 3 Stars (Out of 5)
Learn more at www.gabrielapepino.com.
Posted by Wildy at 7:34 AM