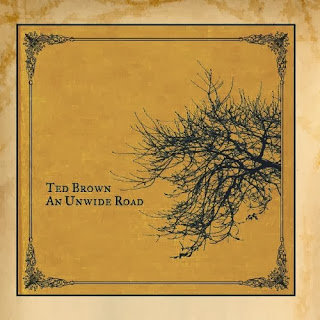 Ted Brown - An Unwide Road
2013, Ted Brown
ed Brown has seen the ups and downs of a life in music.  The New Zealand native was on the rise with his own band when a drug habit sidelined him for seven years.  With more than a decade of sobriety now under his belt, Brown has been very private about his past, but opens up about the journey on his second album, An Unwide Road.  Brown’s voice is plainspoken but angelic at times throughout the album, unfettered by affectation.
Brown opens with the title track wrapped in Eagles style guitar and a free and easy vocal style. Brown celebrates the life of a nomad drifting across a pure Americana landscape. It's a great introduction. "Love Is..." is a classic list using negative declarations to define love by cutting away everything that it is not. At nearly five minutes this becomes an act of endurance based on the repetitive nature and indefinite songwriting approach.  "Least We Can Do" is a swaying folk ballad that gives homage to longevity and holding on through thick and thin.  Brown’s plainspoken vocals take on a lovely air on what turns out to be one of the loveliest performances on the album.
“Blue and Grey” is an intellectual ballad born of a mature perspective and a desire to overcome and survive together.  Brown makes the most of this moment, finding an esoteric beauty among the slowly unrolling melody line.  “Raining Roses” finds Brown waxing poetic in an undisciplined yet well meaning fashion; a run-on love song that’s born of consciousness streaming.  The sentiment here overcomes the lack of pretense or lyrical polish as Brown wins over listeners with pure honesty.  Brown gets sentimental on “Bringing My Past Back (But Not to Haunt Me), a short and contemplative tune about understanding and moving on, although Brown isn’t there yet.  It’s a surprisingly short tune, as the process is still unfolding and the story he’s telling isn’t done.  Rather than wind the song down Brown cuts it off in asymmetric fashion, almost an artistic statement unto itself.
“Beginners Skin” is a languorous story song about starting over that overstays its welcome at 5:18 in length.  Brown uses the same essential dynamic here as he has throughout the album, but the buoyancy of songwriting that has sustained him thus far falters a bit here.  “Rogue Waves” stays with the same slow lyricism, but a quiet energy sustains Brown this time around.  Brown takes Jim Steinman and Meatloaf’s “Two Out Of Three Ain’t Bad” for an interesting spin, building on the balladeering feel of the song.  Brown shows the beauty of the melody by removing the persona of Meatloaf from the song and letting the simplicity of the song shine through.   Brown winds down with “Looking For Home Down Hallways”, a blue collection of thoughts set to music.  Brown cuts this one early, choosing to let the song finish with an almost unfinished feel, turning out to be its own analogy.
Ted Brown is an intriguing singer/songwriter.  His simple and plain approach as a vocalist allows a gentle beauty to emerge from songs of love, loss and heartache.  The occasional stumble occurs when energy levels fall sufficiently to allow song sentiments to outweigh the pacing or style, but An Unwide Road is generally a very pleasant listening experience.  There’s little varnish here, het Brown comes across as very polished nonetheless.  If you don’t mind deep sentimentality in your music then Ted Brown is for you.
Rating: 3.5 Stars (Out of 5)
Learn more at www.tedbrownsongs.com.