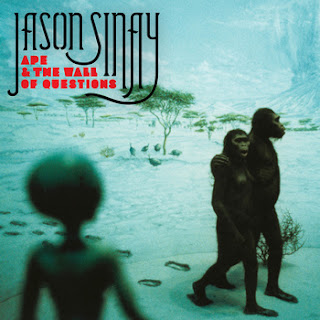 Jason Sinay – Ape & The Wall Of Questions
2011, Apus Maximus
Jason Sinay is a musician’s musician; a top-of-the line session player who has worked with the likes of Jerry Lee Lewis, Neil Diamond, Dr. John, Neil Young, Keith Richards, Tift Merrit, Billy Preston and Ivan Neville (among others).  The seemingly natural born guitarist can play literally anything and play it well.  While Sinay has spent much of his career in the background supporting musical luminaries, he is also quite capable as a front man.  The point is proved on his second solo album, Ape & The Wall Of Questions.


Sinay opens up with a bluesy-folk take on the classic “Jack-A-Roe”.  Sinay’s voice is competent and clear, but it’s his subtly impressive guitar work that takes center stage here, evoking thoughts of such masters as Clapton and Knopfler.  “The Carney” commits to a relentless ennui, brought to life in a repetitive verse structure that is artistic and quietly alive.  The story/portrait here is intriguing, exploring the life of a carnival man.  Sinay paints in broad musical strokes, highlighting it all with country accents on guitar.  This is an outstanding piece of songwriting.  “Next Revolution” takes yet another turn, with Sinay offering up an Eagles-esque California Country style ballad.
“Santa Rosa” invokes thoughts of Tom Petty, both in it’s relentlessly Americana sound and even in the tones of Sinay’s voice.  This road song is all about getting back to the one he loves.  In spite of treading a musical trail that’s been covered thousands of times, Sinay manages to make it fresh and personal.  “I’ll Bring You Diamonds” finds Sinay throwing off melodic and understated licks that are right out of the Jimi Hendrix songbook.  All of this is done to the accompaniment of a sweet groove and a melody you’ll be humming/whistling for days.  On “Gimme The Time”, Sinay works out the kinks and wrinkles of a working class love song in no uncertain terms.  Sinay’s distinctive pop sensibility is dressed in Americana leanings, and the chorus is the sort that gets crowds on their feet.


“Love Minus Zero (No Limit)” is a deeply symbolic song about a love whose depths simply won’t be qualified in mere words.  This plays like an instant classic, as Sinay brings together all of the elements of a great song for five minutes.  “Hey Mama” is a solid R&B roots number that hearkens back to the early days of rock and roll.  This entertaining and danceable number sets up the closer, a rock and roll kiss-off called “Bertha”.  Sinay settles into a classic rock sound for his goodnight, perhaps coming full circle from his musical roots.
Some might listen to Jason Sinay’s Ape & The Wall Of Questions and assume that he’s just showing off.  Well why not?  Sinay is obviously a prodigious talent with a six string in his hand, and shows himself here to be more than a capable songwriter and vocalist.  Ape & The Wall Of Questions is a breath of fresh air, showing off a talent that is still growing and building.  Jason Sinay is an artist you’ll want to catch on to early and follow throughout what promises to be an exciting career.