Opium Symphony - Blame It On The Radio 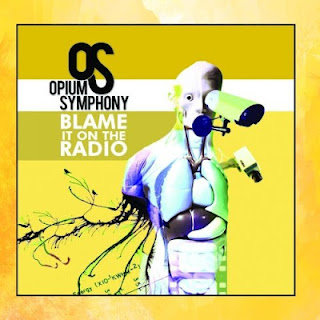 
Opium Symphony kicks things over to the red right out of the gate with the dervish-like guitar work and frenetic drumming of “Dead Radio”.  These tendencies are present throughout Blame It On The Radio in the heavier material.  “Pretty Rich Beautiful” shows off an over-worked drummer and an interesting punk/prog mix that’s equal parts Rush and The Ramones.  The sound and energy here are huge as Opium Symphony opens up a can of sonic assault without losing sight of melody or composition.   “They’ve Got Guns” offers an interesting faint toward lyric, singer/songwriter chanting before bringing in guitars and clearing the air a bit.  This blues-inspired prog rocker is an intriguing listen in spite of the overgrown sound links.  “Down The Rabbit Hole” is more of a sonic roller coaster ride than anything else, with Opium Symphony sounding more than a bit like 1990’s alternative rockers The Men.
“Unknown” is an interesting step both musically and technically.  Opium Symphony strips things down in pursuit of a more polished sound alongside greater compositional leg room.  The result is musically interesting, invoking both prog and pop tendencies.  “Jukebox Junkie” keeps the stripped down style without sacrificing an ounce of rocker intensity.  This is a great listen that will have your feet moving.  “Soul For Sale” tries to create a disturbed ambience through the use of heavy tremolo on the guitar parts.  The result is messy and warped, and ventures into the territory of an almost self-referential cliché.


“Like Pennies You Had Me Wishing In The End” finds Opium Symphony venturing into ethereal, atmospheric rock.  This is yet another stylistic branch on the tree that is Opium Symphony, and it becomes increasingly apparent that there is little that the band cannot do well when it ventures the effort.  “Blame It On The Radio” has the potential to be an incredibly catchy pop/rock number.  The presentation here doesn’t entirely jell, but all the seeds of a big hit are here.  A little advanced production on this number is all the polish this needs.   “In This Together” has the seeds and the polish.  This is by far the catchiest, most exciting track on the album.  Good luck getting it out of your head.  Opium Symphony comes in for a soft landing with “Gospel” and “Return Of The Ghost”, solid tracks both seeming anti-climactic in the wake of “In This Together”.
Opium Symphony delivers the goods on Blame It On The Radio, one of the more adventurous and wide-ranging rock albums to cross my desk this year.  This creative spread does create some issues for the band at times, and not every vision comes off clearly, but Opium Symphony shows great potential to bring new meaning to the phrase “post-genre”.


Rating:  4 Stars (Out of 5)
Learn more at www.opiumsymphony.com.