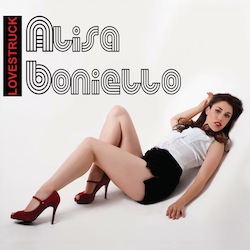 Alisa Boniello – Lovestruck
2012, Alisa Bee
Alisa Boniello has grown as an artist for two inherent reasons:  1.) a wealth of talent, and, 2.) An admirable work ethic.  Shortly after finishing college, Boniello collaborated with Grammy winning producer and songwriter Barry Eastmond (Freddie Jackson, Whitney Houston, Billy Ocean, Britney Spears) to write four songs for what would eventually become her debut EP, Lovestruck.  With an additional songwriting assist from Wendell Hanes (Mya, Brand Nubians, Cheri Dennis), Boniello settles into a comfortable groove as she unfolds her talents across Lovestruck.
Boniello kicks things off with “Lovestruck”, a funky and danceable bit of pop music that’s a bit too organic sounding to be bubblegum, but shares the same, feel-good vibe.  Boniello shows off a capable voice in a number with real commercial radio potential.  “That Kind Of Girl” has some good things going for it, but unlike “Lovestruck” is too thoroughly over produced.  The mix is bad, with a mismatch of levels between vocals and background, and a compressed dynamic range that sounds amateurish.  “(When Will) Love Feel Real” finds Boniello backing down the electronic scale a bit, with ore of a classic pop vibe.  This nouveau girl group pop sound fits Boniello’s voice well.  Lovestruck makes its way into the sunset with the sorrowful ballad “Why”, rung from the deep hours of the night when insecurities and loneliness come to the fore, particularly in the wake of a relationship.  The lyrical content here is a bit stilted, but there’s a nice melodic pop sensibility to the song.
Alisa Boniello has an accessible voice and likeable presence on recorded media.  Lovestruck is a solid introduction to an artist with real potential, but who is still finding a sound and style she is comfortable with.  You can hear Boniello struggling between the overly-manicured electro-pop that is most commercially viable and the classic op sound that she wears so well on Lovestruck, while also slipping into a singer/songwriter oeuvre that she’s still growing into.  Boniello should be making viable music for some time to come; where she goes with it will take time to see.  For now, Lovestruck is a good start.
Rating: 3 Stars (Out of 5)
Learn more at www.alisaboniello.com.