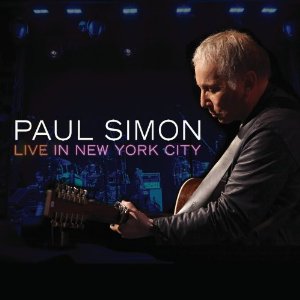 Paul Simon – Live In New York City
2012, Hear Now
It’s hard to argue with the numbers:  12 GRAMMY Awards, 5 #1 albums, and a still-growing songbook that is among the most cherished in modern American music.  Paul Simon is what we call a living legend; a mantle he shared with artists such as Tony Bennett, Aretha Franklin, Barbra Streisand and Liza Minelli.  Simon’s original material is probably the most prolific of the bunch, the reason it must be so difficult for him to choose the songs that fit into a live set.  While there are omissions that might be noted, Simon’s latest release, Live In New York City, is a testament to his status in both the music industry and American Pop culture.
Working almost solely from his solo material, Simon nevertheless constructs a set of live music that has documented the changing world from the 1960’s through today.  Songs such as “50 Ways To Leave Your Lover”, “The Boy In The Bubble” and “Kodachrome” have as much vitality today as they did when first released.  Likewise, none of the poignancy has been lost from classics such as “Slip Slidin’ Away”, “The Sound Of Silence” or “Still Crazy After All These Years”.  Perhaps what is most surprising here is how sure-voiced the 70-year old singer/songwriter still is.  While many of the legends noted above have lost a step or two vocally, Simon still sings with the same dulcet sound he always has.
Live In New York City is a must for fans of Paul Simon, or even fans-to-be who have yet to discover his music.  The 2-CD/DVD or Blu-Ray release is a treat for the eyes and ears.  And Simon, as is his custom, wastes little time on idle chatter with the crowd.  Paul Simon makes certain that those in the crowd, and those listening at home, get their money’s worth.
Rating: 5 Stars (Out of 5)
Learn more at www.paulsimon.com.
Posted by Wildy at 6:30 AM

I hope everybody enjoyed the line concert in New York City by Paul Simon.

Somehow, I got busy living and missed this. I'll be moseying on over to the site, soon. It'll be worth the price. I know this because Paul has never, ever let me down.

Someday, I'll be rave enough to try some of your other musical suggestions, but, just for now, this will do. =)