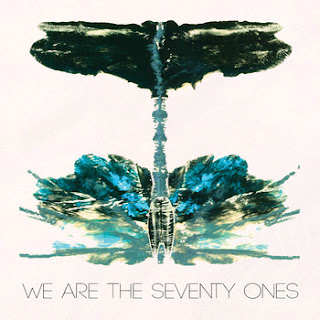 The 71s – We Are The Seventy Ones
2012, The 71s Music
Anthem rock is back.  So declare The 71’s, a melodic power quartet from Houston Texas that is intent on breaking out or breaking something, and soon. The 71’s, known in and around Houston as a group of down to earth guys, write and play with a pretension to greatness that is reminiscent of the best of the progressive rock era.  This is accomplished with a blending of classic rock, punk, glam and even a bit of grunge.  All of this comes together on The 71’s recent release, We Are The Seventy Ones.  The album is not only a declaration of musical independence, but also charts out the course for what might be a long and glorious career.


The 71’s came to musical fruition at the inspiration of such bands as Pearl Jam, Foo Fighers and Oasis, which might explain their wide-ranging musical palette.  Comparisons of late have referenced Band Of Skulls, but honestly this is one case where such pigeonholing tends to sell a band short.  We Are The Seventy Ones reveals a band that has found their musical footing.  And even if, as I suspect, they haven’t fully settled on which path they are going to follow yet, they’ve yet to find anything that they can’t play well.  The album kicks off with a noisy, 1980’s hard pop number in the form of “Blue Blood”.  The 71’s add in a bit of punker sensibility here and end up with a sound reminiscent of early 90’s rockers The Men.

“Confession” builds on a bluesy guitar lick, driving forth in a wanton and vibrant rocker that you will have a hard time getting out of your head.  Interestingly enough, vocalist Keeton Coffman sounds a bit like a young Corey Hart here (think “Sunglasses At Night”).  The 71’s open the jets for “Waves”, a wide-open rocker that seems destined to be played in stadia the world over.  The 71’s keep the energy high and the melodic content higher throughout.  “Adeline” is a vibrant rocker with its own inertia.  You may find that you simply must dance when this love song for a middle-aged rocker plays.

The 71’s show they can do balladry as well as arena rock on “10,000” miles.  This is the fairly typical on the road love song, where the singer pines about getting back home to his baby.  In that regard it’s hard to view the song as being a bit cliché, but the melody is fine and Coffman sings from the heart, and the song is held together by a very solid, memorable chorus.  “Taken” explores the after-effects of a relationship that’s gone bad.  The song is well-written, and if Coffman’s vocal line is a bit overly-dramatic at times it’s just a small slip given the subject matter.  “Victimology” as a song is more of a vehicle for slinging around a six-string guitar than anything else.  The 71’s sound iconoclastic here, reminding listeners that rock and roll is meant to be fun sometimes too.  The pure chutzpah of guitarist Ryan Cecil is entertaining.
“Much Too Much” starts from a great premise, and keeps intact the urgent feel that seems to run throughout the album.  Coffman uses a lot of falsetto here, a choice that appears to not work out quite as well as he might have hoped.  On the plus side, this is the only song on the album I’d be tempted to skip if listening just for enjoyment.  “Lucky To Lose” is a solid, working-class rocker that is guitar-driven and full of a vibrant energy that’s impossible to ignore.  This would be a great tune to check out live onstage.  “Heaven” brings all of the components together, bringing a sense of compositional organization and polish that is hinted at throughout the album.  The melody is memorable, driven by an intriguing hook that replays in your head.  The coolest thing about the song is it could be a conversation between a son and his father, or it could be a prayer.  It’s never entirely clear but works well under either premise.  The polish sticks around for “Monsters”, yet The 71’s accomplish this sense of polish without letting go of the rock and roll edge that has driven them this far.  This is an exceedingly ear-pleasing tune that has single written all over it.


One of the things that make The 71’s so fun to listen to is that they are constantly skating on the edge of disaster.  There is a point of risk taking in music that many artists simply skate around.  The 71’s don’t skate; they march right up to the line and take chances.  As with all such efforts, sometimes they fall and fall hard.  But the pure chutzpah of the band, blended with their individual and collective talents, means that more often than not something intriguing, inspiring or even beautiful comes out of the process.  That’s the story behind the story of We Are The 71’s.  The 71’s will have you from hello.
Rating: 4 Stars (Out of 5)