Peter Link - Goin' Home (On Heaven And Beyond) 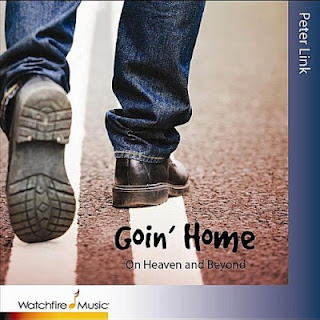 Peter Link – Goin’ Home (On Heaven And Beyond)
2011, Watchfire Music
Peter Link’s musical resume reads like he must have made it up.  Starting out as an actor, Peter Link has appeared on Broadway (Hair), on television (As The World Turns), and in movies (The Out Of Towners).  While successful on stage and in front of the camera, it was composing that drove Link, and he soon began focusing all of his efforts there.  Writing at first for Broadway, Link earned two Tony Award nominations and one Drama Desk Award for his musical work.  One of his songs has charted as a Top-Ten hit on Billboard.  Link has also composed for a number of children’s programs over the years, including Vegetable Soup; Sesame Street, The Electric Company and The Big Blue Marble.


In 2006, Link and James Birch began an on-line inspirational record label called Watchfire Music.  Link has since focused much of his energy writing music inspired by faith.  His most recent effort is entitled “Goin’ Home (On Heaven And Beyond)”.

Goin' Home opens with the title track, an uplifting choral piece that is contemplative and sweet. This transitions into "To My Father's House", a contemporary soul gospel number that is catchy and inspired. "Heaven" takes on a vision of heaven. The conversational style that is meant to make this more accessible robs the song of any real sense of flow. Stylistically this compares to the opening song of a musical; one used to set the scene not impart information. These are rarely the ones you walk away humming.

"I Ain't Gonna Grieve My Lord No More / I Got A Robe" details a list of worldly items that won't get you into Heaven. This is an odd to simplicity and spirituality that's entertaining but light on both. "There's A Mountain In My Way" takes on faith supported by a funky dance beat. The song is catchy and enjoyable from a purely sonic perspective, but is comparable to the lightweight worship music style that pervades Comtemporary Christian Music. "I Can't Go Home" is a languorous ballad acknowledging there is still work to be done before going home to God. The presentation here is over dramatic and weighs heavily in the ears.

"We Fix It" offers up another view of Heaven in a preacher's authorial but does so in a fluffy soul/pop arrangement. "What Could Have Been" is a solo, melancholy love song that looks forward to looking back from beyond the veil and anticipating the sadness that he will have. From a songwriting perspective this is solid work. Thematically the song is wholly inconsistent with the spiritual aims of the album, and the delivery is overly drawn out and heavy. The tide turns for "In Dat Great Gittin' Up Mornin'", where elements of pop, gospel, soul and jazz come together in celebration of the final day when God calls his people home.

"Goin' Home" is a sweet and melodic ode to going to Heaven. The male lead vocal here is exquisite and rich, inspired by his subject. For as good as this is, "When The Saints Go Marchin' In" is equally as cheesy. Opening with a faux news report, things go downhill quickly with a rote repetition of saints from different cultures walking together. The sentiment is certainly worthwhile, but here is an example of where inspirational music puts message ahead of composition. The ensemble eventually gets around to the song itself many listeners will have already tuned out. Things turn more contemplative for the closing track "Come To Me As A Bird", which uses repetition as its focal point. The melody is solid, but the AB lyrical structure will wear thin for some listeners.
Peter Link has proven time and time again he is a great composer; yet even great composers miss on occasion.  There are a couple of misses on Goin’ Home (On Heaven and Beyond), but Link stays the course and generally delivers superb songwriting in a musical tableau that is very accessible.


Rating: 3 Stars (Out of 5)
Learn more at www.peterlinkcreative.com.