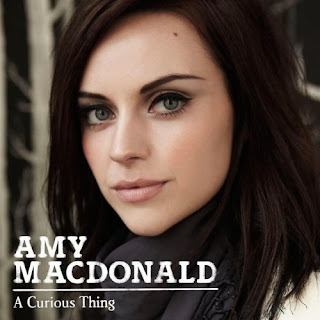 Amy MacDonald – A Curious Thing
2010, Melodramatic Records
At the tender age of twenty-two, Amy MacDonald is sitting on top of the world.  Beginning with the release of her debut album This Is The Life in 2007, the onslaught of critical acclaim, airplay and awards has been nothing short of breathtaking.  All of this from a small-town Scottish singer/songwriter who is the antithesis of celebrity-elite culture. This Is The Life was full of ebullient pop songwriting and MacDonald’s amazing voice.  It would be so easy to simply try and re-create that sound, but MacDonald does not sit pat with her sophomore effort, A Curious Thing.  MacDonald dug into her old notebooks for unfinished gems after two years on the road in the company of her highly talented band, and has taken a giant leap forward artistically without compromising her pop sensibilities.
A Curious Thing opens with “Don’t Tell Me It’s Over”, detailing heartbreak in process with an urgent feel.  MacDonald is revealed as a dynamic vocalist with the sultry alto of Cher yet some of the vocal eccentricities of Kate Bush or Tori Amos.  “Spark” is pure pop goodness; an acknowledgement that she’s okay with either spiritual themes or allusions.  “No Roots” is a lonely rumination on all the events of a human life in a sad cast.  “No Roots” becomes a song of searching without a specific goal; it’s well-written and introspective yet simultaneously upbeat.   “Love Love” a dynamic pop/rock number about being in love about an all-encompassing love and an inability to share it with the subject.   In “An Ordinary Life” MacDonald discusses the whirlwind of celebrity lifestyle and takes great pride in maintaining a simple life away from the stage.  MacDonald captures the blend of excitement and angst that comes with living in the public eye in discussing the importance of maintaining a private space for herself and her loved ones.
“My Only One” is an incredibly mature love song recalling good and bad times and putting them into perspective.  Literate and well-developed, “My Only One” is the sort of song you expect out of a twenty-year vet in songwriting.  “This Pretty Face” gives priority to inner beauty over outer; an establishment of terms about what is truly important in relationships and life in general.  “Troubled Soul” is a song of recognition; of recognizing another who understands you and finding happiness there no matter the circumstance.   “Next Big Thing” has a dark and urgent feel; a driven pop/rock number that explores the darker side of the pursuit of fame.  “Your Time Will Come” is a song of encouragement to a loved one who is going through a period of soul searching.  The message could be trite, but MacDonald avoids the usual pitfalls to find a sweet and heartfelt moment.  “What Happiness Means To Me” is the official closing track, a stripped down moment of reflection that is honest and pure, a step inside MacDonald’s emotional inner sanctum that is nothing short of beautiful.  MacDonald follows this up with a hidden bonus track, an amazing cover of Bruce Springsteen’s “Dancing In The Dark”; A “wow” moment that features MacDonald’s voice with a single acoustic guitar.
Amy MacDonald shows significant growth on A Curious Thing, developing her depth as a songwriter and artist. The leap forward from her debut album, This Is The Life, is nothing short of breath-taking.  This is a significant statement considering the quality of This Is The Life.  A Curious Thing is the sort of album that serves as a career benchmark.  Two years ago you might have been forgiven for wondering if MacDonald would maintain her immense popularity in the UK, given the propensity of pop music fans and programmers toward short memories.  After hearing A Curious Thing, you’ll realize that the sky is the limit for Amy MacDonald.
Rating: 4.5 Stars (Out of 5)
Learn more about Amy MacDonald at www.amymacdonald.co.uk or www.myspace.com/amymacdonald. A Curious Thing is available from Amazon.com as a CD, Deluxe 2-CD Set

Amy MacDonald's "Dancing in the Dark" is my cover of the week:
http://mrshuffleupagus.blogspot.com/2011/01/monday-morning-cover-dancing-in-dark.html

Goodness, there is a lot of worthwhile info in this post!