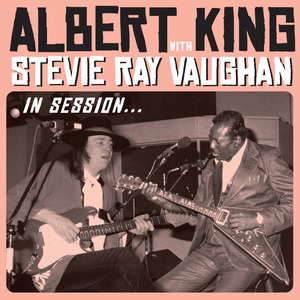 It was a one time union that has become legendary.  In December of 1983, the legendary Albert King shared a soundstage with Stevie Ray Vaughan, a young buck who would himself become a legend.  That recording session has been memorialized several times over the years on CD, but on November 9th of this year Stax Records made the video from that session available for the first time in the form of a CD/DVD package.  In Session... captures two icons of the blues practicing their art in a laid back setting that allows a serious yet playful musical nature shine through.

The album itself has been on the market for years, and if you're already familiar with it there's little to be said.  If, however, you are new to the blues, then In Session may be the perfect place to get your feet wet.  King and Vaughan create magic here and the album is worth owning for anyone with even a passing interest in the blues.  The real reason to buy this release, however, is the DVD, which features three performances not previously available ("Born Under A Bad Sign", "Texas Flood" and "I'm Gonna Move To The Outskirts Of Town".  The video here offers an insight into the chemistry King and Vaughan achieved on the magical winter's night.  That chemistry is apparent in the music on the CD, but you can almost see the energy flow back and forth between the two icons on DVD.

It's reasonable to be skeptical of the sort of value-added re-releases the music industry is so fond of.  They are ultimately cheap ways for the record companies to extact more cash from fans for things they essentially already own.  Occasionally you get fair value in return, and In Session... is one such occasion.  The addition of the DVD illuminates the musical performances on the CD sufficiently to be of value to fans.  And if you're not familiar with Albert King or Stevie Ray Vaughan, you'd be hard pressed to find a better introduction.

Information about Albert King is available from Stax Records, while you can learn more about Stevie Ray Vaughan at http://www.srvofficial.com/.  In Session... is available as a CD/DVD combo, Audio Download

, or DVD from Amazon.com.