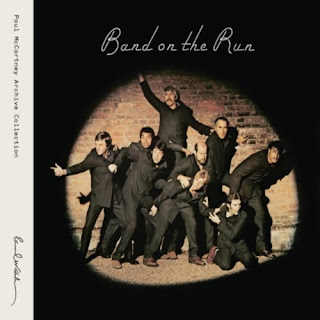 Paul McCartney & Wings – Band On The Run (Special Edition)
2010, MPL Communications/Concord Music Group
When you talk about legends of the rock n roll era, Paul McCartney’s name floats to the top almost immediately.  One of the driving creative forces behind The Beatles, McCartney has gone on to have a lucrative second career with Wings and as a solo artist.  In 1973, Paul McCartney & Wings released their iconic album Band On The Run, earning seven-times platinum designation from the RIAA and three separate stints at #1 on the Billboard charts.  In November of this year, MPL Communications and Concord Music Group re-released Band On The Run in multiple versions just in time for the holidays.
If you’re already familiar with Band On The Run then you know what you’re getting.  If you’re not, you have the opportunity to hear for the first time one of the seminal albums of the 1970’s.  You don’t have to like The Beatles to get McCartney & Wings.  Band On The Run finds McCartney taking his brand of melodic genius – the one that lay at the core of all those Beatles hits of the previous decade – and turning it loose unfettered by other voices.  The album is brilliant as has been remarked many times before by more august publications than ours.    The bonus disc includes the tracks “Helen Wheels”, “Country Dreamer” and “Zoo Gang”, as well as six tracks from the unreleased documentary One Hand Clapping.
Also included in the package is a DVD full of bonus materials that will turn McCartney fans green with envy.  Includes are music videos for “Band On The Run”, “Mamunia” and “Helen Wheels”.  An album promo is included, as well as short films “Wings In Lagos”, “Osterly Park” and the aforementioned documentary One Hand Clapping.   A deluxe edition adds a third CD plus a 120-page hard-bound book.
A healthy level of cynicism is always warranted with such re-issues.  Record labels and artists are motivated to sell you something you already have by packaging it with something you do not.  It really becomes a question of whether the bonus materials are worth dropping the money for.  In the case of Band On The Run it really comes down to your level of fanaticism for Paul McCartney and his music.  Hard core McCartney fans will love the bonus disc and DVD.  The sound quality on the original album doesn’t seriously differentiate itself from prior releases, so this one is all about the bonus materials.  For the true McCartney fan, this one is gold.
Rating: 4 Stars (Out of 5)
Learn more about Paul McCartney at http://www.paulmccartney.com/ or www.myspace.com/paulmccartney.  Band On The Run is available from Amazon.com as a Standard CD, Special Edition 2-CD/1 DVD set