Artist Of The Month: Straight No Chaser - December 2010 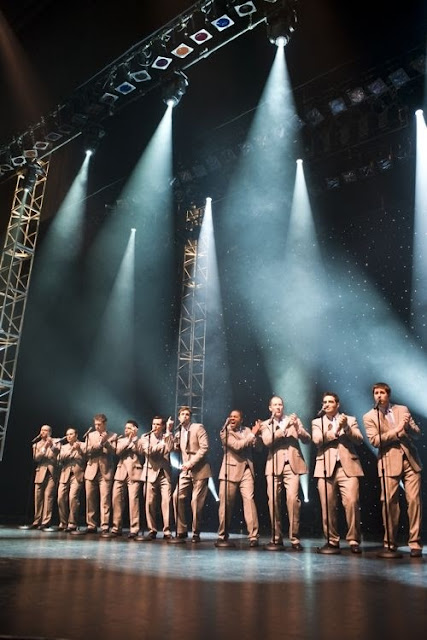 Wildy's World is proud to present our December, 2010 Artist of the Month, Straight No Chaser.  The male a cappella group, originally formed at Indiana University in 1996 by a group of friends who could sing has turned into a national phenomenon.  With over 25,000,000 YouTube views and a number of top-40 singles, Straight No Chaser regularly sells out shows and recently did a residency at Harrah's in Las Vegas.  Original members Randy Stine, Charles Mechling, Jerome Collins, David Roberts and Walter Chase remain with the group.  The rest of the 10-member ensemble have been picked from later versions of Straight No Chaser, and include Michael Luginbill, Ryan Ahlwardt, Seggio Isho, Don Nottingham, and Tyler Trepp.

What makes the story of Straight No Chaser so worth knowing is its utter inevitability.  In the 1980's and 1990's, starting a cappella groups at colleges around the country was the thing to do.  The practice was common throughout Northeast Colleges throughout the 20th Century, and many long-running groups have their own followings outside of their college communities (RPI's Rensselyrics, The Whiffenpoofs of Yale University, The Beelzebubs (Tufts University), The Amherst Zumbyes, Vassar's Measure 4 Measure, University at Buffalo's Buffalo Chips, USC's Reverse Osmosis all being prime examples).  Straight No Chaser's renaissance happened quite by accident.  The group's popularity as an on-going ensemble at Indiana University prompted a ten-year reunion show for the original lineup at Indiana University in 2006.  After that show, Stine posted a 1998 concert on YouTube.

All of a sudden Straight No Chaser was hot property.  In 2007 the group's intriguing take on "The 12 Days Of Christmas" generated in excess of seven million views on YouTube.  The group caught the eye of Atlantic Records Chairman/CEO Craig Kallman, who knew magic when he saw it and jumped at the opportunity to sign the group.  The rest, as they say, is history.  Straight No Chaser currently has four albums listed on their website, and is currently promoting a box set called All I Want For Christmas, which includes their two Christmas albums; 2008's Holiday Spirits and 2009's Christmas Cheers, along with a previously unreleased DVD entitled Live In New York Holiday Edition Concert Special.  Having seen the YouTube clips and seeing and hearing the buzz from those who have actually seen Straight No Chaser live, it's impossible to deny that this group has found some kind of special musical magic.  We've reached out to Atlantic Records to try to bring you reviews of the albums themselves this month, and hope to have more for you as the month goes on.  For now, enjoy this clip, which shows why Straight No Chaser continue to capture the hearts and minds of America.