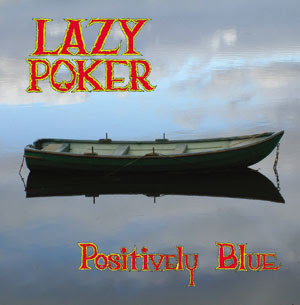 The heart of The Blues is in… Scotland? Strangely enough it might just be true. Mixing electric blues with a southern rock sensibility, Lazy Poker will knock your socks off with their second album, Positively Blue.

This three-piece from Carnoustie is comprised of Jamie Harper on Guitars/Vox, Grant McConnachie on Bass/Vox, and Drummer/percussionist/vocalist Mel Ross. They weave blues magic on songs such as Heartbreak Road, Looking After Number One and Come on In Mr. Blues. The most impressive thing about Lazy Poker is the organic feel to their music. One has the sense that Lazy Poker has obtained a collective consciousness musically that allows the music to grow and spread of its own free will.

This sort of magic is found rarely by bands, and it makes Lazy Poker a particular joy to listen to. It’s almost like listening to one functioning organic unit rather than three musicians. Positively Blue has also charted on iTunes as a top ten blues album, and Lazy Poker has already participated (and even headlined) several international blues festivals. If you are not familiar with this wonderful band, the time is now!

You can learn more about Lazy Poker at www.lazypoker.co.uk, where you can purchase a copy of Positively Blue in their online store!
Posted by Wildy at 1:55 PM