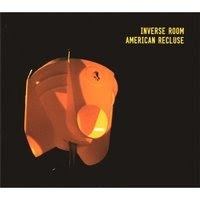 Inverse Room is the musical alter ego of novelist J. Robert Lennon. Aside from writing four critically acclaimed novels and numerous short stories, Mr. Lennon has been trolling musical waters for years with some success. As half of the electronic due Bemus Point, and now as Inverse Room, Mr. Lennon continues to plumb his creative muse for interesting and unique musical stories.

On American Recluse, Inverse Room comes across as a somewhat garage sounding Michael Stipe on several tracks. The music is varied and thoughtful with the occasional flash of humor. “I Wouldn’t Die” is perhaps the standout on the album. The key to the music here is that J. Robert Lennon brings his skills as a novelist to his lyrics. He has an ability to bring characters to life for 3 ½ minutes in a way that makes them personal and real. The only other musician I know with this particular talent is Randy Newman.

That’s not to say Inverse Room is the second coming of Randy Newman. The music itself does not recommend itself as sonically outstanding, but serves as efficient backdrops for the stories J. Robert Lennon would tell you. This is not another example of a writer delving into music, but of a multi-talented artist with a lot to say and several mediums in which to speak. Check it out.