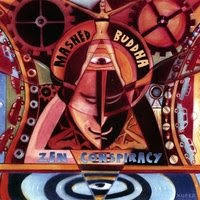 When John Corda steps into his alter ego, Mashed Buddha, magical things begin to happen. Eschewing the derivative nature found in much electronica, Mashed Buddha relies on extensive piano/keyboard skill and an inimitable groove to create a sonic sphere to envelope the listener. There are no tricks here. John Corda has an understanding of musical composition that escapes many of the tech-heads who dabble at their computers in the wee hours of the morning.

The music is cerebral and danceable at the same time. “Zen Conspiracy” will leave you feeling like Coleridge when it’s over: You will play it again and again trying to recapture the vision of Xanadu that is both there and not there. Add in the musings of Uri Geller on “Hype”, and the artwork of Peter Kuper (Spy vs. Spy), and you have one tasty recording. In spite of not being a big electronic fan, I have to recommend this highly.

You can learn more about Mashed Buddha at www.mashedbuddha.com. You can purchase copies of Zen Conspiracy at www.cdbaby.com/mashedbuddha2.
Posted by Wildy at 7:04 AM