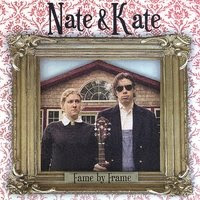 When you first look at a CD you never quite know what you’re going to get. The packaging can be extremely misleading at times. Nate & Kate’s Fame By Frame is housed in a cover modeled on “American Gothic”, and is only a hint at what is inside.

In the vein of another once-Ithaca, NY-based duo, Once Blue, Nate and Kate take a sometimes tired musical form and breathe magic and life into it. Americana/folk has never sounded so good. Nate (Nate Marshall) is a dynamic singer-songwriter with unusual lyrical ability and a perfectly imperfect voice. The ever eponymous “Kate” brings the mellow, sometimes dancing sound of her cello and her lush voice to enhance the sonic landscape of Nate & Kate.

The highlights here are many, but “Faith, Hope & Love” may be one of the most moving songs you’ve ever heard. Songs such as “Like Dandelion Seeds To The Wind”, “The Dark Side Of The World”, “Pissin’ Into The Wind”, “Freight Train Play That Chord”, and “When Our Day Is Done” will have you hitting repeat time and time again. Many albums lead with the strongest material and peter out from there. Fame By Frame keeps getting stronger song by song.

This is an absolute keeper; a desert island disc. Nate Marshall’s songwriting rivals that of Jesse Harris of the aforementioned Once Blue. (Jesse Harris won a Grammy for “I Don’t Know Why”, recorded by Norah Jones). Kate is the perfect counter and harmonic balance (although it would be a treat to hear a little more of her on lead vocal once in a while).

I can’t recommend this strongly enough.

You can learn more about Nate & Kate at www.nateandkatemusic.com. You can purchase a copy of Fame By Frame at www.cdbaby.com/natekate.
Posted by Wildy at 7:07 AM

I saw Nate & Kate in Poughkeepsie NY and they were so awesome. Nates juggling was crazy! I love "The Dancing Screen" nad "Face in the Checkout Aisle" from Fame by Frame