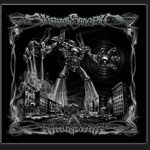 The music is a pleasant listen, but isn’t challenging or particularly interesting. For me it equates to background music: Something to have on at work when I am trying to concentrate and don’t want to be disturbed or provoked by the music. I could also see this is background at a very mellow party.

I am all for transformation in music. Stagnancy in an artist is an unforgivable sin, but it would seem that Slightly Stoopid has given up an essential element of what made them Stoopid in the first place. A large part of the draw has always been the melding of punk/surf and reggae. Unfortunately the sharp edges have been worn away, leaving a smooth stone that is pretty, but not remarkable.

Rating: Borrow it from a friend.

You can learn more about Slightly Stoopid at www.slightlystoopid.com, or www.myspace.com/stoopid. You can purchase Chronchitis in most major music retailers or on the band’s website for $11.99 plus shipping.
Posted by Wildy at 6:04 AM