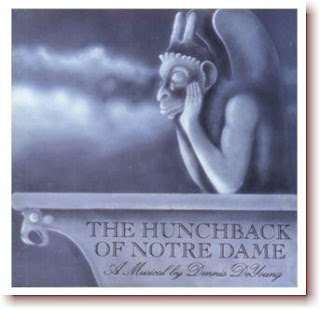 This recording has been kicking around for a number of years, but a review is warranted as the musical The Hunchback of Notre Dame will be making its Chicago, Illinois debut in May at the Bailiwick Repertory Theatre. Dennis DeYoung (formerly of Styx) released a concept recording of this show back in 1996. It has never been released in stores, but has been available at shows or at his website.

“Hunchback” is the story of a tragic love triangle between Esmerelda (a gypsy dancer), Father Frollo (a priest) and Quasimodo, the deformed bell ringer of Notre Dame Cathedral. Dennis DeYoung has penned a moving and powerful presentation of this classic story. “Hunchback” includes all the elements of a great Broadway production. After your first listen you’ll walk away from this recording humming or whistling melodies that just won’t get out of your head.

Some of this is classic DeYoung balladeering: “Paradise”, “With Every Heartbeat”, “Beneath the Moon”, and “While There’s Still Time”. Three of these songs have made appearances either on Styx albums or Dennis DeYoung albums in the past. “Who Will Love This Child” may be destined to be a Broadway classic. This is the sort of song that people will appear in Best of Broadway shows and compilations for the next forty years should “Hunchback” actually make it to Broadway (and it should).

There are other gems here as well. “Alms for the Beggarman” is my favorite track from the show, displaying the lascivious and dishonest nature of the beggars in the show. This is DeYoung’s “Fugue for Tinhorns”, and also is a potential classic. “King of Fools”, “Hey Quasimodo”, “This I Pray” and “Bless Me Father” are also all great songs. And you can’t walk away from this without falling in love with DeYoung’s take on Ave Maria. You’ll get chills.

All songs on the CD are performed by Dennis DeYoung, with the incomparable Dawn Marie Feusi singing the part of Esmerelda beautifully. The album was produced by longtime Styx producer Gary Loizo.

A lot has happened to Dennis DeYoung in the last 10-15 years. While this project has been out there for a long time, it is a clear testament to his talent, perseverance and knack for writing great theatrical rock songs. This recording gets my highest recommendation. Whether you enjoy Broadway, or just great pop/rock songs, this recording is definitely a must-own. And if you happen to be in the Chicago area between May 8 and July 6, 2008, check out the show at the Bailiwick. When “Hunchback” is a smash on Broadway in a few years, you’ll be able to say you saw it first.

You can learn more about Dennis DeYoung at www.DennisDeYoung.com. You can also purchase copies of The Hunchback of Notre Dame there. While you’re there, also check out his Canadian released solo album “One Hundred Years From Now”. If you’re a Styx fan you’ll love this disc. And if you’re interested in attending a performance of “Hunchback” at the Bailiwick Repertory Theatre, you can purchase tickets at www.bailiwick.org.
Posted by Wildy at 6:23 AM