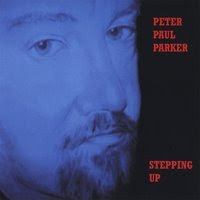 This is a true solo project, with Mr. Parker writing and producing all songs, performing all instrumental work and providing all vocals. The result is an uplifting and unique recording that captures an optimistic and hopeful spirit. Songs like In My Hands, Sad But True and Landslide scope out the sonic landscape and give the listener an idea of the borders in which Mr. Parker writes. Walk Away is perhaps the most powerful and moving song on the record. Letting Me Down reminds the listener that Peter Paul Parker knows how to rock a little as well.

Stepping Up is a very well-rounded rock album. The very mellow approach in production makes for an easy listen (ala Cowboy Junkies) without losing the energy of the songs. It’s a fine effort that is worth a listen or six.

You can learn more about Peter Paul Parker at www.peterpaulparker.com, where you can purchase a copy of stepping up. You can also grab a copy at CDBaby.
Posted by Wildy at 5:59 AM