REVIEW: Woodward - But Your Kids Are Gonna Love It 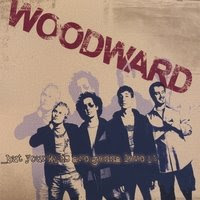 If there were ever a band destined for super-stardom, it’s Detroit, Michigan based Woodward. I’m not talking about MTV and top-40. I’m talking about selling out Wembley Stadium or Yankee Stadium or even Maracana stadium; several nights in a row. I don’t mean to be overly effusive with my praise for Woodward, but if ever there were a perfect package in the rock world it might be called But Your Kids Are Gonna Love It. Drawing on sonic influences that transcend the 1970s and 1980s FM Rock genre, Woodward has built a modern sound that is equally welcoming to young rock fans and their parents (perhaps even young grandparents).

This is a quintessential rock and roll album. Starting out with “All Over (Washed Out)”, Woodward leads off sounding like Billy Joel singing with the Ramones. The fun isn’t over there. “Find The Words” sounds like it might have been lifted from an early Queen album. I actually found myself returning to the Queen reference several times throughout the album. What makes this album such a treat is that even when Woodward sounds like someone else, they are distinctively themselves.

“Find The Words” is easily my favorite track here, but there isn’t a weak track here. “Did I?”, “Take It Back”, “Days You Come From” and “Far From Home” are all outstanding. This CD actually got loaded to my iPod and has been on near-continuous play at work for the last three days. It’s that good.

Woodward delivers a set of hook-heavy modern retro-rock songs that are a sonic pleasure. The songwriting is top-notch, the vocals are perfectly fit to the songs, and the harmonies stand up with the likes of Queen or Styx. Add to all of this Woodward’s reputation for electrifying live shows and you know that these guys are going somewhere. Don’t be surprised if a few years from now theirs is the concert ticket you can’t buy anywhere but on eBay. But Your Kids Are Gonna Love It gets my highest rating, and then some.

You can learn more about Woodward at www.myspace.com/Woodward. You can purchase their CD at CDBabyor at CD Universe.
Posted by Wildy at 2:37 PM

You are right right right!!! I love Woodward and they are always on constant repeate on my ipod!
-kells

Everything you said is so true, and not at all an exaggeration.