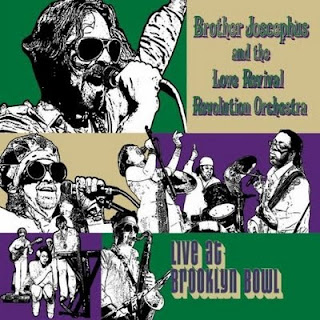 The album is also available via iTunes.
Posted by Wildy at 5:10 AM

Brother Wildly,you say "there is something missing this time around" and and that "it feels like a rehash" of their debut release.
Well, I don't know what cd you listened to,but on my copy of 'Live at Bklyn Bowl'only ONE song appears that is also on the debut (A Child Shall Lead).Other than that there are no other repeated numbers.
I really think you should listen again,as the live recording adds so much additional energy.
"A Child Shall Lead'- much better live than in the studio.
How about 'Revolution of Love" and 'Make Love To Your Woman!' How bout those horn arrangements and those awsome changes! What a groove! What a tight live sound.Not to mention their stage presence.What a Great Band to see Live.They got the groove of James Brown with the wit of Zappa and the Mothers.The ballad 'Whiskeydick Blues' is alot of fun and Samia's vocals on (Queens)'Somebody to Love" cannot be outdone. She's at the top of her game,what a delight to hear her.She is Top notch/incredible!
'Good Times' is a quick,fun TV theme that is familiar to most.What can i say about 'Shine On' other than it is a brilliant song.Jam style with great solos and an teriffic refrain,this is one of BroJo's finest works.'Born on The Bayou',which you mentioned,jams and morphs into a 'Low Rider'-'Superfly'jam that stretches into space before goin back to the bayou.
'I Still Love You'is a beautiful love ballad.'Mighty,Mighty Chain of Love'is just awe-inspiring!Positive vibes with Genuine love(BroJo style) served up with the entusiasm and zest of a Broadway production.Could be BroJo's 'Theme Song'. Then again,so could 'Revolution of Love'.
Out of 5,I give 'BroJo Live at Bklyn Bowl' a 6 !!!!