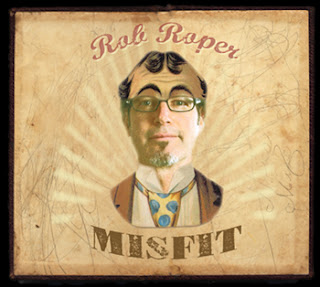 Rob Roper - Misfit
2011, Rob Roper
Denver-based singer/songwriter Rob Roper remembers when an album's artwork was as important as the music inside.  Growing up in an era when cover art was almost a competitive sport, Roper remembers falling into great album covers and music as a complementary experience.  For Roper's debut album, Misfit, Roper strove to recreate that experience for a new generation of music fans.  Roper brought in Salli Ratts, who created the artwork for Steve Martin's The Crow.  Ratts created the cover as well illustrating each song in the included booklet.  Roper's gentle blend of Americana and rock n roll is as memorable as the package it comes in.
Misfit opens with the melodically lush Americana of "Falling Into Heaven".  Portraying the travels of a benevolent wanderer as a personification of self, Roper seems to see Heaven as a state of being achieved by doing the right things.  "Misfit" is a quirky rock number about not fitting in anywhere.  Driven by a heavy rhythm section, the number is highly entertaining; although more of a list of things he is not than a narrative.  "Chair On The Moon" is a distantly self-pitying number about living life outside of expectations and the loneliness that accompanies the choice.  Roper's blue country style works well here.
"Me" is both discovery and celebration of self; a realization that the nine-to-five world isn't for him.  It's an entertaining number with an island feel that owes at least a nod to Jimmy Buffett.  "Little White Boy" is an insightful look at racism through the eyes of a young boy who can't make sense of the concept.  It's an edgy country number that makes a lot of sense in its lack of understanding.  Roper turns ironic on "BiPolar", an entertaining diatribe on the ups and downs of the disorder that's tuneful and catchy.  Roper closes with "The Screwup Song", a song of regret and nearly joyful resignation from someone who's never managed to get his life together, and wouldn't change a thing in spite of feeling bad about.  He doesn't understand why he is the way he is; wants more, but won't give up the simple pleasures he has.
Rob Roper plinks at heart strings and funny bones on Misfit, finding both the sorrow and the humor in some of the shadowed crevices of day-to-day life.  The album definitely has its highs and lows, but what emerges is a solid songwriter with a talent for telling stories from unusual perspectives.  Misfit is an entertaining effort.
Rating: 3 Stars (Out of 5)
Learn more about Rob Roper at www.robroper.com or www.myspace.com/rroper.  Misfit drops on May 17, 2011.  Keep checking Roper's website for availability.
Posted by Wildy at 5:00 AM