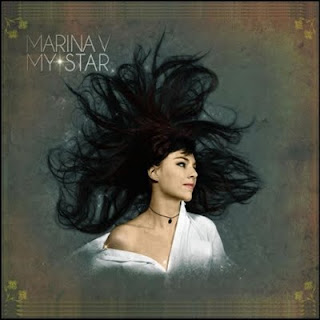 Marina V - My Star
2011, Marina V
Moscow-born California gal Marina Verenikina won a scholarship at the age of fifteen and moved to America on her own.  Marina V began pursuing her musical dreams by gigging extensively while attending college in Illinois.  On graduating, she moved to Los Angeles, and has established herself as a favorite in the frenetic pop/rock scene there.  Marina V has composed songs for films such as Fallen Idol and Truth About Kerry, and has had songs placed in Days Of Our Lives, The Good Wife, and the iPhone game Tap Tap Revenge.  Marina V’s 2007 album, Modern Fairytale, announced an artist with a world of potential still learning her craft.  On her latest album, My Star, it’s clear that Marina V has grown in self-awareness as an artist.
My Star opens with "You Make Me Beautiful", a solid Adult Contemporary Pop love song.  Built on a strong musical bed, Marina V's warm, lovely voice is framed perfectly here.  "Thursday Song" is a melancholic ballad with a pretty melody and dreamy air.  There is a grey-scale depth to the song, however, that veers widely away from cliché and into a sort of complicated beauty.  "Blue For You" is a fairly straight forward song of heartbreak, pretty but bland at the same time.  Marina V sounds like a richer voiced Tori Amos on "My Star".  The piano that spurs the song along is supported by a symphonic-style arrangement that is sonically appealing.
By the time Marina V gets to "Unbalanced", the upbeat quasi-rocker is a welcome change of pace.  Up until this point the music has been very self-involved, and while "Unbalanced" is still an internal conversation, its acknowledgement of a world outside is step in the right direction.  Marina V shines brightest on "Tonkaya Ryabina", a traditional Russian song that is haunting in its beauty and brings out additional textures in her voice.  My Star closes with "Magical Christmas", a modern Christmas ballad about recapturing the spirit of Christmas and of youth.  It's a sweet and positive addition to the modern Christmas pop cannon; low key, but pretty and warm.
Marina V can flat out sing.  Her voice is full of textures and tones that are intriguing and lovely.  The heavy focus on ballads on My Star wears thin, and Marina V shines best on an upbeat rocker and a traditional folk song.  My Star seems an effort to cast Marina V's voice in its best light while adhering to what may be perceived as a highly marketable genre, but the song choices here generally don't do the artist many favors.  The sound is great, but there are obviously musical niches that take best advantage of her stunning voice.  It would be nice to hear more of those.
Rating: 2.5 Stars (Out of 5)
Learn more about Marina V at http://www.marinav.com/ or www.facebook.com/marinavmusic.  My Star is available digitally from Amazon.com and iTunes.