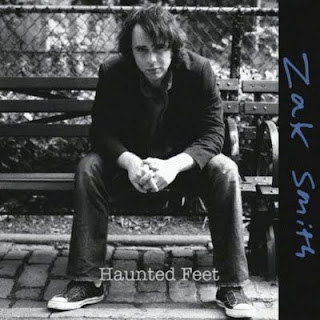 Zak Smith - Haunted Feet
2010, Zak Smith
On one hand you could argue that there are few original voices in popular music anymore.  Everyone is influenced by one or more artists of the past, and with a mere 8 notes it is difficult to do something truly original.  Yet it is the blending of styles and sounds that marks originality; not the similarities but the choices of division.  In one of these finely honed musical crevices grew the art and creativity of Zak Smith.  Other writers have compared Smith to Elvis Costello, Leonard Cohen, Kings Of Leon and The Killers.  Fair comparisons all, but Smith's proclivities as a songwriter run a bit deeper.  Check out Smith's debut EP, Haunted Feet, and you'll understand.
Haunted Feet opens with "Under Your Possession", a catchy and affable blues/rock/Americana blend that grows a bit more infectious every time you hear it.  Smith's pleasantly raspy voice perhaps doesn't have a great deal of range, but Smith makes the most of what he has, pouring his personality into each vocal performance.  "Suffer Like A Ghost" is a solid pop/rock number full of layered sounds.  The unpolished sound here seems more an artistic choice than a liability.  "The Ones That Got Away Will Bury Me" is an intriguing number based on a somewhat morbid concept.  Smith sounds like a cross Tom Petty and Marc Cohn here.  "The House You Haunt" features an understated approach and a catchy, compact rock n roll number.  Smith's personality oozes out of this song in omnipresent waves.  The EP closes with "Faith But Waiting", a catchy number with great sonic atmosphere.  The keys/guitar mix here is righteous, fleshing out the songs hooks in lifelike fashion.
Zak Smith is the guy you don't see coming.  The music on Haunted Feet will seem nice and appealing to you the first time you hear it.  You might even be forgiven if you don't back to Smith right away; but the more you listen something interesting happens.  Zak Smith sucks you in to his songs slowly, over time.  Haunted Feet is a slow burn, but one well worth waiting for.
Rating: 4 Stars (Out of 5)
Learn more about Zak Smith at www.zaksmithband.com or www.facebook.com/zaksmithband.  Haunted Feet is available digitally from Amazon.com and iTunes.

I saw the Zak Smith Band recently in concert both in Manhattan and NJ. I really like him a lot. I look forward to much more.

I've seen him a bunch of times. It's very worth the trip out to wherever he is.