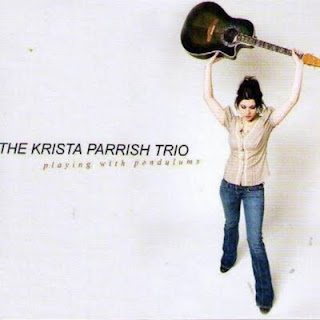 Krista Parrish Trio - Playing With Pendulums
2010,
Krista Parrish comes across as two distinct artists on her debut album, Playing With Pendulums:  The fingerstyle guitarist who impresses with both her finger- and fretwork on a series of instrumentals that show both technical skill and an advance lyric and melodic sensibility; and the singer/songwriter with an untrained and pleasant, though occasionally pitchy voice.  The two roles alternate throughout the album, which features six instrumentals out of the twelve tracks presented.
Playing With Pendulums opens with "Happy Guitar", with Parrish showing an intriguing mix of melodicism and drive on what sounds like a souped-up Windham Hill recording from the late 1980's.  It's a nice start, letting you know that an hour spent with Krista Parrish won't be like your typical Indie Folk/Rock album.  Parrish shows mild-to-moderate pitch issues on both "Hola Nino Hemoso" and "Skywatching".  The latter is a dreamy folk number that's quite a pleasant listen in spite of the occasional vocal misstep.  "The Mind's I" is a circular instrumental that relies on repetitive passages and heavy drum and bass influence to drive it.  Parrish's guitar work is technically proficient, but this track gets stuck in a rut.
"When The Day Is Done" is solid, built in a simplistic arrangement with some sweet vocal harmonies blown into the mix.  "The Ground We Lay On" is the star composition on the album, with Parrish pulling out all the stops on a chorus that would sound about right from a heavy metal band.  The acoustic presentation here is intriguing, but Parrish positively rocks out in a complex turn with progressive rock tendencies.  "Playing With Pendulums" shows Parrish's softer side, a pastoral and dreamy guitar-led number that's pretty and contemplative.
"When" is a song of heartbreak from the deliverer's perspective.  Painted in barre chords, the melancholy air here is substantive.  Parrish's unvarnished voice is the perfect complement.  "Mexico" starts on a mix of fingerstyle and hammer-on techniques, quickly evolving into a fast-paced rock instrumental.  Fun and fast-paced, it's a positive mood-shifter at just the right time.  Parrish says farewell with "Head First Heart Last", a melodically laconic and meandering instrumental full of pretty atmosphere.  It's a mellow lullaby that puts the entire project to bed quite nicely.
The Krista Parrish Trio mostly delivers the goods on Playing With Pendulums.  Parrish is impressive on guitar, laying down complex and interesting compositions in fingerstyle while maintaining a pop/rock sensibility most of the time.  As a vocalist, Parrish is solid, although she does run into pitch issues from time to time.  It's actually refreshing to hear someone brave enough to say, "here's my voice, take it or leave it", rather than give in to the temptation of pitch correction software.  To the left, the maintenance of pitch issues on a finished album does give the affair a less professional feel.  All in all, Playing With Pendulums is a positive experience.  There's certainly some room for growth here, but Parrish is off on the right foot.
Rating: 3 Stars (Out of 5)
Learn more at www.kristaparrish.com or www.myspace.com/kristaparrish.  Playing With Pendulums is available from Amazon.com as a CD or

Came across this review this morning & was perplexed. I am a fan of this artist and have been since she released her first record in 2000. Playing With Pendulums is NOT her "debut album" as the blogger refers to it, it's more like her fifth album. I assumed reviewers of albums did their homework on an artist before writing about them but not in this case. Krista's vocal tracks on this album are A+++ and her voice is flawless. My wife and I have seen her a dozen times live and we've never heard that young lady sing out of key. We recently saw her open for Stanley Jordan & she was amazing, one of the few opening acts to get an encore from the audience. She had us all in the palm of her hand. The line to get her autograph was just as long as the headliners. There's a lot of false information in this review but I've read many other reviews on Krista both in print and online and they are accurate & stellar reviews, this one just fell very short. I would encourage anyone who reads this to go to the artists website or youtube channel and read other reviews if you haven't heard of her. He doesn't even mention her song (can't remember he track #) Easier Said Than Done going to #1 on the music charts. We give the album 5 out of 5 stars.

One the great things about music is that two people can listen to the same album or song and hear different things. Thank you for sharing your view!