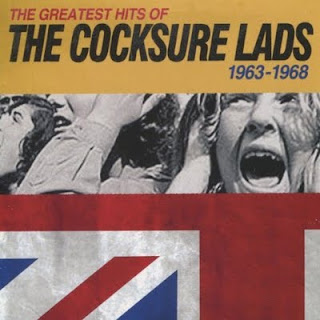 The Cocksure Lads - The Greatest Hits Of The Cocksure Lads: 1963-1968
2010, The Cocksure Lads
Somewhere in the annals of British Pop history, someone once uttered the words "We should name our band The Cocksure Lads".  This individual was most likely beaten, sacked or traded to another band for a tube amp.  Nevertheless, the name sifted its way through the wormholes of time and settled itself in Southern Ontario in the first decade of the third millennium CE, waiting to be found.  Along came Moxy Fruvous alums Mike Ford and Murray Foster, who unexpectedly tripped into the name and a collection of virulent songs that would redefine pop history.  After bringing fellow Fruvous alum David Matheson into the fold, Ford and Foster added            to complete the rebirth of The Cocksure Lads.  Somewhere between The Beatles, The Rutles and The Monkees lives the memory and sound of The Cocksure Lads.  The lads are immortalized for the first time on The Greatest Hits Of The Cocksure Lads: 1963-1968.
If you're a fan of British Pop born of the 1960's, and don't mind a bit of Python-esque (or Fruvous-esque) humor, then The Cocksure Lads are for you.  Opening with "You're A Cocksure Lad", the band makes a startlingly authentic impression.  The music is insanely good, full of the sort of arching melodies British Pop is renowned for, and even capturing some of the grittiness of recordings done in the early 1960's.  The Cocksure Lads manage to take the music seriously even as they lace it with freshly dated wit.  "A Case Of The Dropsies" is highly danceable rockabilly with a memorable melody line.  You'll want to dance so bad you'll grab the next person who walks through the door.  "Ships Ahoy!" is part Paul McCartney silly little love and part sea shanty.  It's an amazing musical conglomeration with a pirate fixation that involves a love affair, a trip around the world and highly questionable seasonings.  The Fruvous lads always had a knack for high value entertainment and tunes, and those qualities bloom here.  Try as you might, you won't be able to get this one out of your head.
"Umbrella Girl" sounds like an authentic 1960's ballad, but is in fact an old FruSong that has never appeared on an official release before.  If you're not familiar with FruSongs, they are tunes written about hard core Fruvous fans who had attended a significant number of shows.  This mock up of the song works exceedingly well.  "Ticky Boo (Look Though My Window)" leans a bit more to the Monkees side of the equation; a delightful bit of 1960's fluff pop that's indescribably, infectiously catchy.  The energy and pizzazz continue on "That's Any Good".   If you had to pick just one song from the album to drop into rotation circa 1965 and get a hit, it would probably be this one.  With a killer melody, positive outlook, and just a hint of Austin Powers-style cheese ball humor, "That's Any Good" would be a can't miss single.
"You Gotta Stay Cocksure" is stereotypical of the songwriting styles of the time, when record labels pushed artists to re-use ideas that worked previously to max out capitalization of the label's profit.  Accordingly, such songs often had a re-tread air.  The Cocksure Lads manage to avoid any such feel with a brilliant pop tune that stands on its own.  Things get a bit strange on "The Car Boot Light That Never Quite Shuts Off", as the title might suggest.  It's an exploration of self sung over funeral-style organ.  Drawn in its own apparent contradictions, the tune is funny in a slightly disturbing manner.  Mike Ford contrives a singing voice here that's part Ringo Starr and part Wakko from The Animaniacs.  "Admiral Trafalgar" is a fun, historical nod to Admiral Nelson, the British Commander at the Battle of Trafalgar in 1805.  This one is done in the style of Ford's Canada In Song series, but dressed up in a 1960's pop arrangement that's fun.
"Mushy Peas" celebrates home, wrapping up the singer's affections in the symbolism of a meal of mushy peas and spam.  There's really nothing else to say.  "I've Already Been Loved, Love", is pure Beatles pop with an R&B backbeat; a treatise on not getting to the buffet table of love too late.  The faux-bass lead vocal line is perhaps the funniest part of the song.  The Cocksure Lads close with "Wellies In The Bath", an amusingly jaunty little tune about one man's predilection for wearing knee-high waterproof boots while bathing.  It's an odd close, but amusing nonetheless.
The Greatest Hits Of The Cocksure Lads: 1963-1968 is one wild ride.  Humor born of both intelligence and kitsch abounds, dancing its way amidst melodies that would make the Queen Mother proud.  These sorts of concept albums often fail and fail horribly, if for no other reason than the idea behind them usually sounds better in discussion than it does playing out across a full length album.  The Cocksure Lads will make you believe that the British Invasion isn't over.  The reunion of 3/4 of the Moxy Fruvous lineup features hints of that band's musical and comedic prowess, but builds on the individual members continued growth to create something wholly memorable and fun.  The Greatest Hits Of The Cocksure Lads: 1963 - 1968 is essential listening.  You won't be able to get The Cocksure Lads out of your head.
Rating: 4.5 Stars (Out of 5)
Learn more about The Cocksure Lads at www.facebook.com/cocksurelads.  The Greatest Hits Of The Cocksure Lads: 1963-1968 is available digitally from Amazon.com and iTunes.

Those of you who prefer your music dizzy can pick up the CD at MapleMusic.com.
Posted by Wildy at 5:00 AM

"Wellies in the bath" has to be a song promoting condom use, doesn't it?

Murray is trying to get a movie made about the Cocksure Lads and needs backers - please read more here! http://www.kickstarter.com/projects/1246945042/you-gotta-stay-cocksure