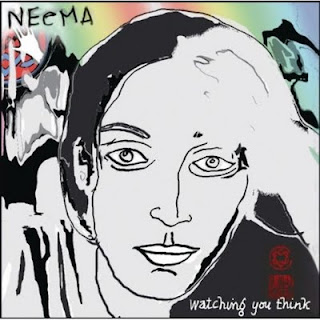 NEeMA - Watching You Think
2010, Neemaste Music/SONY
NEeMA is one of the most exotic artists in pop music.  The Canadian singer/songwriter is the daughter of Egyptian and Lebanese parents, but it is her life experience that sets her apart.  NEeMA has spent time with the Dalai Lama and Mother Teresa; she has worked with homeless children in the streets of Egypt, and has even worked with the Wekweti First Nation in the Northwest Territories of Canada.  NEeMa blends folk, jazz, world and pop in unusual fashion on her album Watching You Think.  Produced in association with Leonard Cohen and Pierre Marchand, Watching You Think has NEeMA poised to break out in 2011.
Watching You Think opens with "Unspoken", a baroque pop tale of love steeped in an air of tragedy.  This is a compelling opener with a beautifully mysterious sound.  NEeMA has a strong storyteller vibe about here, and crafts an intriguing acoustic arrangement full of strings.  "Romeo And Juliet" is a nice, fresh cover of the Mark Knopfler tune that falls somewhere between the original and the more upbeat version cut by the Indigo Girls.  NEeMA's vocal line is conveyed in an almost conversational style that's appealing.  "Unwinding" is solid, although a bit repetitive in the chorus.  This one doesn't quite keep up with the first two tracks energy-wise, but is an apt album track.
"Running" blends ethereal and earthy elements that contrast wonderfully with NEeMA's voice.  Hers is not a typical voice, filled with textures and sounds that are a bit foreign to the western ear.  The individual notes aren't always hit perfectly, but the quality of her voice is deeply intriguing.  "Eternity" is an exploration of adolescent angst over mortality and how it follows us through life.  The theme is coming to terms with our eventuality, and while a bit drawn out is actually quite well done.  "Escape" is more upbeat pop with a nice melody.  Adolescence holds sway once again, this time pushing at the boundaries and growing up.
"Stay" is affected and unbelievable.  NEeMA attempts to use elements of Middle English in a highly contrived number where the emotion sounds as affected as the language.  "Sidewalk" is a hippy Americana love song with a great arrangement but not much in the way of energy.  NEeMA has a compelling voice, but at times, as here, is too reserved for her own good.  "Bone To Pick With Time" sidles back to anxieties about time slipping away, pining for all the things she wants to do but has lost out on.  "Jealousy" has a raw, entertaining arrangement that's entertaining.  The guitar used here sounds ever-so-slightly out of tune, giving the whole affair a slightly surreal sound.  "Elsa's Lullaby" is a gorgeous and heartfelt love song to a child.  Any parent, and particularly any mother, will identify with this tune.  NEeMA has found a true 'WOW' moment with this one.  Watching You Think closes with "Masi 2010", a dark song with a less-than-hopeful message about the future of humanity and the runaway degradation of our natural resources.  NEeMA builds a primal feel into the song, sampling Middle Eastern keys and chant-style vocals that sound aboriginal in nature.  This is a compelling closer that you have to hear to understand.
NEeMA will open eyes and ears with Watching You Think, a vibrant and lively collection of songs and observations that will grab onto you and not let go until the ride is over.  NEeMA brushed aside expectations as easily she takes a breath, offering an enduring and compelling work that will keep you coming back.  Watching You Think will leave an impression.
Rating: 4 Stars (Out of 5)
Learn more about NEeMA at http://www.neema.ca/ or www.myspace.com/neemaste.  Watching You Think is available from Amazon.com as a CD or Download