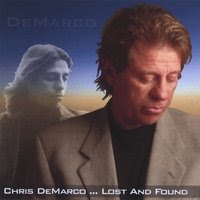 What a long and varied road it's been for Chris DeMarco. From his days fronting Island Recording artist Riff Raff to his current tranquility base in Atlanta, Chris DeMarco has made a career of creating/performing well-crafted songs. His latest release, Lost and Found, is no exception. Chris DeMarco trots out a list of musical friends that boggles the mind: Dick Wagner (Alice Cooper), Tommy Talton (Gregg Allman), Ken Mazur (Robert Palmer), Barry Richman (Lynyrd Skynyrd, Rhys Clark (Billy Joel/Freddy Jones Band) and Jim Fielder (Buffalo Springfield/Blood Sweat and Tears/Neil Sedaka). Oh, and let's not forget Billy Joel and Michael Monarch (Steppenwolf), who appear on the bonus track Sail Away.

Lost and Found is a rather varied record within the classic rock realm, with some songs (I Don't Wanna Wake Up, Out of The Blue, I;m Calling You, Love and Murder) that work very well. A couple of tracks fell flat for me, but overall this is a very powerful album. As a songwriter DeMarco is extremely talented, and obviously the band is top-notch. The sound is a little dated perhaps for the younger set, but those who know great music will be instantly attracted to Lost and Found.

Unknown Soldier is my personal favorite track, with it's neo-country Americana flavoring. Sail Away is a close second. You'll know Billy Joel by the presence of his signature keys (A riff that sounds like it might have been pulled right from Captain Jack). This is a first-class classic mellow rock album. It's not going to find a lot of traction with the kiddies, but will appeal strongly to fans of 70's & 80's AOR stations. An admirable effort.

You can learn more about Chris DeMarco at www.chrisdemarco.com. You can purchase Lost and Found on iTunes, Rhapsody & Napster as downloads. If you're like me and prefer the old-fashioned hard copy, check CD Baby or most major music retailers.
Posted by Wildy at 9:45 PM