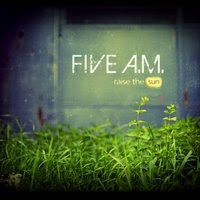 Five A.M.'s fans believe in them. All three of Five A.M.'s CDs have been funded or otherwise sponsored by fans. It's one thing to plunk down money for a band's CD, and another altogether to put up money to help make a CD that has yet to be recorded. Five A.M. inspires this sort of loyalty in their fans because of the quality of their music. On Raise The Sun, Five A.M. has crafted a disc full of radio-worthy songs that should help them gain much wider exposure.

Produced by Jeff Dawson (Daniel Powter) and mixed by Mike Fraser (AC/DC, Aerosmith, Rush, Metallica), Five A.M. is like a September call-up to the big leagues that plays his heart out. Raise The Sun features inspired songwriting, memorable melodies, class harmonies and a keen pop sensibility. Think Matchbox 20 with a little more muscle and you're in the right ballpark. Be Still, Just Say Anything and Still In Love With You are key songs on the more pop side. The title track has more of a Live (Lightning Crashes) feel to it, and one senses that there is a rougher side to Five A.M. that may come out more on stage.

The Distance is far and away my favorite track here, and would have significant radio exposure with the right push. This is a true potential hit.

Five A.M. is a very talented band and have offered up a great record in Raise The Sun. It deserves much attention.

You can learn more about Five A.M. at www.fiveam.com. You can purchase a copy of Raise The Sun at www.cdbaby.com/fiveam5, or on Amazon.com.
Posted by Wildy at 6:32 AM