CD Review: The Bangkok Five - We Love What Kills Us 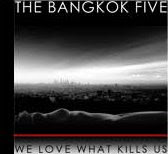 The Bangkok Five – We Love What Kills Us
2008, Long Live Crime Records

Coming June 10th on Long Live Crime Records is the sophomore effort from The Bangkok Five: We Love What Kills Us. The presentation itself is unique, five hard driving rock songs performed in English, and then again in Spanish. The lead singer, Frost, sounds a great deal like John Thomas Griffin from Cowboy Mouth. I actually did research to make sure it wasn’t him on vocals under a different name.

We Love What Kills Us is an outstanding album, although I personally would like to have heard more songs rather than a rehash of the five tracks in Spanish. Nevertheless the songs translate well across the language barrier and likely open up additional markets for The Bangkok Five. The highlight track for this reviewer is Party Machine, a rather stark indictment of the life of the party. The title track is top notch as well. Straight Fell Off and This One’s For The Haters are also quite enjoyable. Outlines Of Us is somewhat jarring here. There’s nothing wrong with the song, but it just doesn’t seem to fit in all that well with the other four tracks.

This Los Angeles quintet is one to watch. My initial impression is they may miss once in a while with a song, but they’ll be dead on most of the time. This disc is a great effort, and will be in heavy rotation on your iPod. In the hey-day of hair bands on MTV, The Bangkok Five would have been mega-stars. It may happen yet.

Rating: Four Stars (Out of five)

You can learn more about The Bangkok Five at www.thebangkokfive.com. We Love What Kills Us will be released June 10, 2008.
Posted by Wildy at 5:00 AM

I thought good punk died after the '80s. Apparently I was wrong. This CD is punk rock brought back to life, and it's just plain sexy. Apparently they're touring right after the CD comes out. Those are some shows I won't be missing for anything.