CD Review: My American Heart - Hiding Inside The Horrible Weather 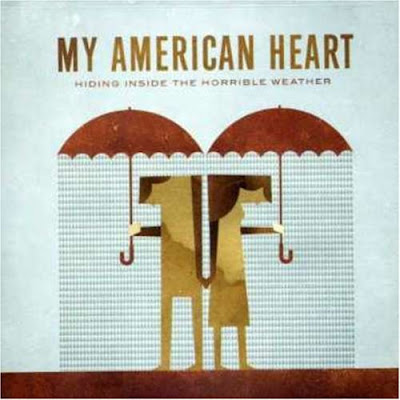 My American Heart – Hiding Inside The Horrible Weather
2007, Warcon Records

San Diego, CA based My American Heart has been making music since 2002 (previously under the name No Way Out). Their fifth release, Hiding Inside The Horrible Weather was released in 2007. This is an interesting record to review in that there are to My American Hearts evident here. The first four songs on the record I could have done without. They’re not bad, but I think the title of track four sums it up (“Tired and Uninspired”. Tracks 1-4 sound like a band going through the motions, perhaps at the behest of a record label exec who is trying to craft a certain sound for marketing? This is just a guess; the My American Heart that appears on tracks 5 through 11 is a much different, more interesting band.

The title track is an unapologetic rocker with great hooks. The Innocent Letter is a perhaps the highlight of the disc, with driving guitar and a highly memorable melody. There Are More Frightening Things… opens with a guitar riff that is reminiscent of a dark Message In A Bottle, and showcases the band’s energy and spirit. Even slower tracks such as Dangerous, Fantasy and All My Friends have an energy and life to them that is just missing from the early tracks.

The album is worthwhile, and shows a band coming into its own as a collaborative process. I just hope in the future a little more thought is given to song choice (or at least to song order). It’s not unusual to have a few tracks on any record that just don’t work, but it is best if those tracks are either sandwiched among tunes that do, or left for the end of the album (or single b-sides). My American Heart is a talented outfit, and I have confidence that they will continue to strive to create and serve up great rock and roll!

You can learn more about My American Heart at www.myspace.com/myamericanheart. You can purchase a copy of Hiding Inside The Horrible Weather at Amazon.com or most major music retailers.
Posted by Wildy at 6:00 AM