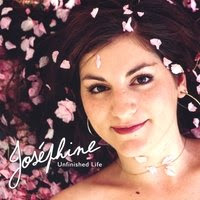 Joséphine brings a certain grit and vivacity to her music that is belied by her little-girl looks. To say I was pleasantly surprised by her CD Unfinished Life is an understatement. This Paris native left home at age seventeen for the streets of Montreal, landing in New York City by the age of nineteen. Joséphine discovered her love of performing in Montreal with the Vibe Award winning People’s Gospel Choir of Montreal and has never looked back from there.

Joséphine offers up twelve very mature and emotionally honest songs on Unfinished Life. Songs range from ballad to soul-influenced rock. My personal favorites here are Stronger, Heart Vs. Head, and the moving Can’t Let Go. I Sing is also of particular note, as it is an ode to chasing your dreams.

I Think Of You (Je Pense A Toi) is also a lovely ballad, incorporating both French and English lyrics. All in all there is not a weak song here, and there is life in these songs that would seem to belie a mischievous and fun streak in the artist. It is a talent to be able to project these traits into recorded media on a consistent basis. If Joséphine can project these traits live then her concerts will be a treat worth lining up for.

I was struck by the vocal similarities between Joséphine and one of my favorite Indie folk artists, Jess Klein. The sound of their voices is almost identical at times, although stylistically they differ. The texture of Joséphine's voice would make her interesting to listen to if she were singing names out of the phonebook.

You can learn more about Joséphine at www.myspace.com/josephineonmyspace. You can purchase copies of Unfinished Life at www.cdbaby.com/josephinesongs.
Posted by Wildy at 6:30 AM