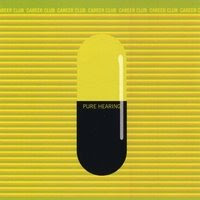 Set for release on June 1, 2008 is Career Club’s Pure Hearing. The unusual rock due from Brooklyn, NY features Hans Gutnecht on Vocals/Guitar and Phillipp Gutbrod on drums. Pure Hearing is an exercise in the marriage of pop-savvy grunge with the sort of gothic new-wave that poured out of England in the late 1980’s. The end result is a noisy, angular rock and roll record that should land significant critical acclaim.

Quietly doing their own thing in the New York City music scene for the past few years, Career Club has built a solid following by pandering to nothing other than their own musical muse. The musical results are raw in the way good rock and roll should be. There is actually a strong stylistic resemblance to Canadian rock stalwarts Max Webster (Kim Mitchell). Like Max Webster, not everything here is accessible to the casual listener, but 10 of 13 songs have faced some level of commercial appeal.

Highlights from Pure Hearing include Jenny’s On The Stereo, Skatta-Do, Running In Place and Down In Arms. Career Club strikes me as the sort of band who lives for the live show environment. I highly recommend you check them out live if you happen to be in New York City. Pure Hearing is a positive musical step that should bridge to more great music and exploration by Career Club.

You can learn more about Career Club at www.careerclubmusic.com or www.myspace.com/careerclub. You can purchase copies of Pure Hearing at www.cdbaby.com/careerclub2.
Posted by Wildy at 7:00 AM