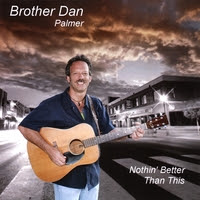 Listening to Nothin' Better Than This is like sitting down to a drink with an old friend you haven't seen in a few years. By the end of the CD you'll feel like you've known Brother Dan Palmer forever, and you'll wonder where the time went.

A veteran singer/songwriter who's seen the wars, Brother Dan boasts a songbook of over 1,000 cover tunes that he has acquired over the years. On Nothin' Better Than This he offers up ten original songs that deserve your attention. The songwriting is honest and clean, and there are few finer guitar players out there.

Brother Dan is difficult to pigeonhole. There are times he reminds me of Trout Fishing In America, such as on "Meant For You", but comparisons to the likes of James Taylor and Dan Fogelberg are not out of the question. A prime example is "He Said Nothin'"; a rueful remembrance of how fear of loss can become self-fulfilling, and is this reviewer's favorite song on the album.

Brother Dan holds nothing back, as displayed on tunes like "Time Keeps Tickin' Away", and "Out The Door". The latter is a comical confrontation of a former lover/spouse who insists on drawing mutual friends into the maelstrom of personal attacks that can accompany a relationship post-mortem. This is how Brother Dan closes out the album, with a wink, a nod, and a kick in the pants.

Don't pass Brother Dan by. You'll probably never hear him on top-40 radio, but that says more about the sorry state of radio than about this fine recording.

You can learn more about Brother Dan Palmer at www.myspace.com/brotherdan2. You can purchase Nothin' Better Than This at www.cdbaby.com/brotherdanpalmer.
Posted by Wildy at 7:21 PM

I couldn't agree more! Not only did I feel like I've "known Brother Dan Palmer forever ",
I wanted to sit down with him, have another drink, & learn more about this guy. Great guitar, great story telling, great music. he reminded me a little of Harry Chapin, who I relly enjoyed. All that with a twinkle in his eye! I'm glad I got his CD.

Brother Dan has been in the music business for many years and his clean recording says it all: It's clean. And, it's friendly. Nothing like sitting at the bar & grill soaking up his melodies. And, he encourages participation. Just last night we were all belting out the back-up to some of his songs while on the dance floor. It was all great fun and if you haven't heard Brother Dan live, you're really missing out. Check out his schedule, soon to be near you-
www.myspace.com/brotherdan2 or
www.brodanproductions.com

Not only do I know Brodan but, My Brother and I played with him since we were kid's and Widly's opinion is dead on about The song's and sources. Love you DP. Bobby and Raymond P.

There is absolutely no doubt that Brother Dan will move you in some way. I have laughed, cried, smiled, dreamed and danced with his songs. Dan is loved by many and the world is a better place having him in it. Support live music, you won't want to miss spending time with Dan.

Well just for the record, it's "Wildy", not "Widly" as Anonymous typed it, but otherwise I agree from what I know. Brother Dan is very talented, and if the sort of honesty in his recording comes across live, then his performances must be incredible. Thank you all for reading/commenting!

I totally agree with Wildy's observations. Dan's music evokes lots of emotions and gets to the heart of things. Very real and true. I've been listening to Brother Dan sing and play for years, and I never tire of him. He just keeps getting better and better. I highly recommend his CD! And if you haven't ever had the pleasure of seeing him perform live, you have got to put that on your "to do" list. He's lots of fun! I agree with Fantasmo - the dancing was great fun!

Brother Dan's music is so motivating, you can't help but want to dance. He is someone that can sing one song after another, and you never tire of his music. Brother Dan is so full of life. I got hooked on his music the first time I listened to him. His CD contains two of my favorite songs, which are Time Keeps Ticking, and He Just Said Nothing. His lyrics make you feel all of life's emotions. No one should be without his CD!