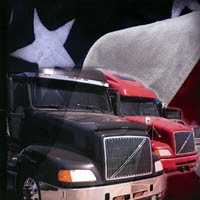 Trucker Tracks, Volume 1 is billed as “Dedicated to all the men and women who move the heavy loads down the highway and the families that they leave behind…” It is a collection of country-rock tunes from the likes of Johnny Neel, Mike Cullison, Joe Durham, Greg Crowe, Rodger Mason and Bob Rea. The CD itself is a little uneven, as often happens with such multi-artist collections, but there are several high points. Most of them coming from the incomparable Johnny Neel (“Led Foot Boogie”, “Blindside”, “Saddle Up And Ride”, and “Folded Flag”). Mike Cullison provides a moving “Goin’ Up The Country” which may well be the cornerstone of the CD.

Rodger Mason is also a pleasant find on this disc, with “Trucker’s Son” and “West Coast Run”. All in all this is a solid collection with will appeal to those in the profession, country music fans, and some fans of blues-oriented rock. That being said, it’s more of a niche album rather than one that will have widespread appeal. It’s definitely worth the listen.

You can learn more about Trucker Tracks, Volume 1 at www.truckertracks.com.
Posted by Wildy at 6:24 AM