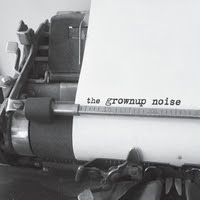 Evoking thoughts of Barenaked Ladies and the Cowboy Junkies, The Grownup Noise bring a smooth understated rock sound to their debut album. The first time I listened to this CD I felt like each song was vaguely familiar; like I had heard many of them before. The Grownup Noise has a talent for writing songs that are instantly likeable and familiar without sounding derivative. Katie Franich's dancing cello lines add another element of life to tight musical arrangements and the easy vocals of Paul Hansen.

The Grownup Noise infuses their humor here and there throughout the album, but never come anywhere near being a novelty act. These are fine musicians who are willing to pop their listeners a wink now and then, just to keep it light. Highlights include "Make Believe", "Messy Apartment", "Grey Skies", "First Time", "Vampire Love Song", and "Give Me Time". There is no chaff here though folks: Every song here is able to stand on its own.

Given the musical talent, the unique but vaguely familiar sound, and perspective displayed by The Grownup Noise, I can see them developing a strong following and sticking around for many years. They are, frankly, the kind of band REM could have been if they hadn't gotten so into themselves. Give them a listen, you won't regret it. This is a fine debut.

You can learn more about The Grownup Noise or purchase their CD at www.thegrownupnoise.com . Also be sure to check out www.myspace.com/thegrownupnoise!
Posted by Wildy at 8:19 PM

This is a great Cd. Highly recommended