Yael Naim - She Was A Boy 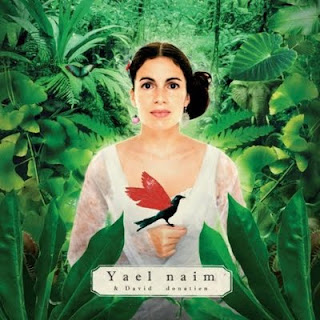 Yael Naim - She Was A Boy
2011, tot Ou tard / VF Musiques
Yael Naim rocketed into international consciousness back in 2008, due to the inclusion of her song “New Soul” in an Apple advertisement.  While this break was real and palpable, it’s hard to imagine someone with the talent of Naim not making it.  Together with collaborator Davd Donatien, Naim has spent much of the last two years in her Parisian flat/recording studio, writing and recording material for her sophomore album, She Was A Boy.  The album is due for US release on May 10, 2011 digitally and May 17, 2011 on CD.
She Was A Boy opens with "Come Home, a catchy bit of mellow pop/jazz fleshed out with orchestration. The arrangement is silky smooth and showcases Naim's wonderfully breathy alto perfectly.  "My Dreams" is an interesting blend of pop, jazz, new age and world music.  Beauty, urgency and need are all portrayed as part of the whole in the most sonically intriguing song on the album.  "She Was A Boy" plays with middle eastern scales in a catchy bit of orchestrated pop music. Yael Naim is no stranger to notoriety.  "New Soul", featured on Yael Naim, turned into a sensation overnight with its inclusion in a MacBook Air commercial.  That may be nothing compared to "Go To The River", which is one of the catchiest songs of 2011 so far.  You won't be able to get this song out of your head for days at a time.  Naim uses layered voices to create syncopated harmonies and rhythm on a chorus you will never forget.
"Never Change" features heavy southern European influences and a cantering pace to highlight a memorable melody.  It's a solid changeup from "Go To The River" that's subtle but perhaps just as unique in its own right.  "Today" is personal and compelling, and features Naim's best vocal performance on the album.  Her voice is utterly breathtaking in a song of heartbreak and yearning for something more.  The orchestration builds layers into the sound that are compellingly lush.  "Mystical Love" shows another side to Yael Naim, sounding a bit like something that might have been written through collaboration between Tori Amos and Andrew Lloyd Webber in the early 1970's.  The song is highly original and quirky in construction, showing a deep melodic sensibility with pop pretensions but a highly original sense of musical vision.
"Man Of Another Women" takes on a middle eastern flair in an intriguing number that may catch you by surprise.  It's one of those songs you don't necessarily pay active attention to the first time you hear it, but find yourself humming later and perhaps uncertain where you heard it from.  "Puppet" has pure sonic appeal, with Yael Naim sounding a bit like Milla Jovovich but with a middle eastern rather than slavic influence.  "If I Lost The Best Thing" is a highly personal and heartfelt number that is gorgeous in both instrumentation and vocals.  Naim replicates these qualities on the closing track, "Game Is Over".
Whereas 2008's Yael Naim balanced French and English fairly equally, Naim sticks with mostly English on She Was A Boy.  The songs offered here show a musical depth that is rarely on display in pop music.  Yael Naim creates songs full of emotional and musical substance that speak to you from the depths of her worldly experience.  The songwriting on She Was A Boy is compelling, and the sounds, whether instrumental or vocal, spend much of the time surpassing beauty.  This is not an album to ignore of pass by.  She Was A Boy is a Wildy’s World Certified Desert Island Disc.
Rating: 5 Stars (Out of 5)
Learn more about Yael Naim at www.yaelweb.com or www.myspace.com/yaelnaim.  She Was A Boy is due for release on May 10, 2011 for digital and May 17, 2011 on CD.  You can pre-order the album through Amazon.com on CD or as a Download

iTunes has yet to post a link to pre-order the album, but expect one shortly.
Posted by Wildy at 5:00 AM

The chap is absolutely just, and there is no question.