Morgan Bracy - The End Of Cinderella 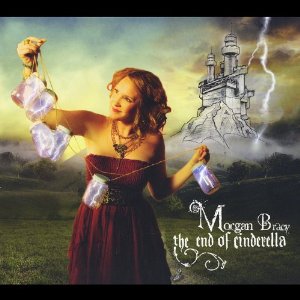 Morgan Bracy grew up in a small town in Tennessee, singing in church and writing songs from a young age.  It wasn’t until she left home for Middle Tennessee State University that Bracy truly bloomed as an artist, however.  Working with the group Broken Pottery, Bracy found her own voice as a songwriter.  She released her debut album, Dirty Laundry, in 2007, and was introduced to producer John Merchant (Barbra Streisand, The Bee Gees, Celine Dion).   Merchant liked what he heard, and wanted to help Bracy find the full potential of her sound.  The two began working on the album The End Of Cinderella, a song cycle centering on tales of fairy tales gone awry.  It is in this emotional wellspring where Bracy shines brightest, portraying each story and character as if it were somehow her own.

"The End Of Cinderella" is a coming of age song; a heartbreaking realization that real life is not a fairytale. Bracy's performance here is fully committed, and here powerful, sometimes tinny voice (ala Susanna Hoffs or Jess Klein) is compelling. "She Believes" is a middle of the road pop/country number about domestic violence, and how the belief in fairytales can keep someone in a bad relationship. Bracy concocts a solid melody and a memorable chorus here, in a song with moderate commercial appeal. "Silence" decries someone who is absent even when he is there. It's a self-realization that things aren't going to change, wrapped up in an edgy pop arrangement that gets your toes tapping. Bracy's lyrics flow like water, and her voice punches the melody line with conviction.

"The Looking Glass" examines self worth and insecurity in a powerful, musically dense ballad that walks the line between pop and country in style and sound. Bracy continues to show vocal power, but also shows a subtlety of phrasing that contrasts well with her pure force as a singer. Bracy's interpretation of Randy Newman's "When She Loved Me" (from Toy Story #?) is lovely and lush, full of strings and a wonderful counter-melody in the piano part. Bracy ventures into full soprano range at one point in the song, and it sounds, at first, if things might fall apart, but she holds it together and turns in a nice performance. "When The Spell Is Broken" has a more soulful feel, with Bracy's soulful alto getting more exposure. The verses are solid, but the chorus is very memorable - the type you don't shake right away.

"Real Life Fairytale" is a buoyant little love song with distinct pop sensibilities. When Bracy sings about the quiet ecstasy of falling in love, it's as if she's experiencing it all right in the moment. This is a brilliant tune. "Between The Covers" is about the anticipation of what is to come in life and the transformation from looking ahead to living in the moment. Bracy closes with "Love, Believe In Me" is a song of longing from one who sees love all around here but hasn't found it herself. The simple, guitar-based arrangement is simple and lovely, playing the perfect complement to Bracy’s voice and to that of her vocal counterpart.

The End Of Cinderella is the musical portrait of an artist who deserves much more exposure than she's gained to date. Bracy's songwriting is compact and polished, but full of heart. She performs each song as if the ideas and emotions within are occurring at that very moment.  If Bracy carries this kind of presence to the stage, then concert goers will never want her shows to end. Morgan Bracy is the real deal, and The End Of Cinderella is an essential album


Please note that the Amazon.com prices listed above are as of the posting date, and may have changed. Wildy's World is not responsible for price changes instituted by Amazon.com.
Posted by Wildy at 7:00 AM