Howie Newman - You Shoulda Been There 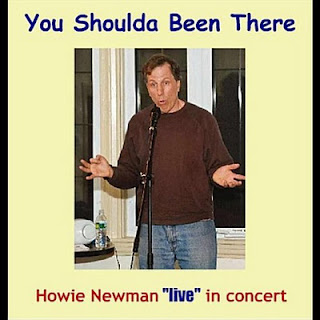 Howie Newman - You Shoulda Been There
2011, Major League Records


Brooklyn-born Howie Newman moved to Boston in 1968 to attend Northeastern University and never looked back.  His love of sports led him to nearly two decades as a sportswriter, and as a part time color analyst for the Lowell Spinners (Boston Red Sox minor league team.)  Oh, and by the way, Newman is also one of the most engaging singer/songwriters on the New England folk circuit.  His humorous and ultimate human observational songs put listeners at ease, and his live presence is as folksy and down home as you could imagine.  Newman recently released a new captured live EP, You Should Been There, a highly entertaining 6-song cycle featuring Newman at his best.


You Shoulda Been There opens with "Products On TV", a cute and comical take on infomercial fare written before the advent of the remote control. Newman brings his usual charm in the live performance, although the recording setup leaves something to be desired. "My Baby Can't Parallel Park", a song Newman wrote for his wife, is full of pep and humor, and would have fit perfectly on the old Dr. Demento show. Done in a 1950's rock and roll style on acoustic guitar and harmonica, the song is highly entertaining and fun. Newman turns to sweet reminiscence on "Our Kids Aren't Kids Anymore", a heartfelt ode to a father's love and how quickly the time you have with your children fades. Newman does a stand-up cover of The Lovin' Spoonful's "Do You Believe In Magic?” a solid rendition that's absolutely faithful to the original. Newman immortalizes a late night road trip with his brother from 1970 in "My Last Cup Of Coffee". It's a sweet and funny remembrance in classic, folk singer/songwriter style. Newman's anecdotes are worth listening to as well, particularly the 'music consultation' (you'll have to listen to find out.) Newman closes with "That Old Car", a folk and rhythm and blues ode to the memories an old, rusted-out bucket can represent. What might seem cheesy in another's hands out plays as sweet and sentimental from Newman.


Howie Newman keeps things simple on You Shoulda Been There, letting the sweet authenticity of his songs speak for itself. While Newman's songwriting generally stays on the lighter side, there's a palpable heart to his work that you simply can't ignore. You Shoulda Been There is highly entertaining. There will always be coffee house stages waiting for performers like Howie Newman.


Learn more at www.howienewman.com or www.myspace.com/howienewman.  If you’d like to purchase You Shoulda Been There on CD, you can get it directly from Newman via a PayPal payment, or from CDBaby.  Digital links are below.


Please note that the Amazon.com prices listed above are as of the posting date, and may have changed. Wildy's World is not responsible for price changes instituted by Amazon.com.
Posted by Wildy at 6:38 AM