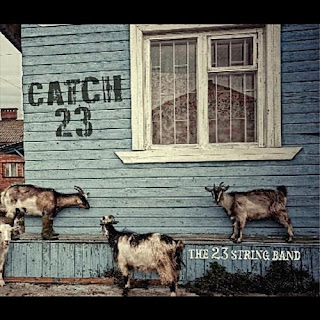 Eastern Kentucky is the home base of The 23 String Band, an acoustic quintet consisting of Chris Shouse (guitar, lead vocals); Curtis Wilson (banjo, vocals); David Howard (mandolin, vocals); Scott Moore (fiddle, vocals) and T. Martin Stam (bass, vocals). In spite of their acoustic approach, the band brings electric energy to modern songs with traditional bluegrass stylings. A live set from The 23 String Band could easily follow a traditional bluegrass tune with a Beastie Boys cover; the unpredictable nature of the band has earned them a significant following in a short time. And their "original hillbilly music" has earned them the respect of bluegrass fans both modern and traditional. The band released Catch 23 earlier this year. The only surprise here is that they haven't received wider acclaim.

Catch 23 opens with "Fat Frankie", the frenetic tale of a small time drug dealer. The dark and urgent modern bluegrass arrangement is compelling, and The 23 String Band has created a classic story song. The violin work of Scott Moore is particularly amazing. "Long Hot Summer Days" features solid, deliberate pick work. Shouse gets soulful on the lead vocal, and there's a distinct blues feel blended into the bluegrass arrangement. "Catch 23" is a dynamic instrumental that breaks out into a jazzified breakdown. Once again, fiddler Scott Moore is a standout. The band is forward and fun on "Leave Everything To Me", an amusing little love song with a memorable melody.

"Listen To Her Heart" is a soliloquy sung to a romantic interloper; an attempt to hold on to the one he loves. The arrangement here is pure gold, with tremendous instrumental interplay and absolutely gorgeous vocal harmonies intertwining throughout. The 23 String Band goes old school on "Bees Knees", getting back to deep bluegrass roots so completely you'll think you're in a time warp. "Hey Pretty Mama" is a tongue-in-cheek come-on song that's fun and entertaining. It's followed by the vibrant instrumental clinic of "Deer Tick". It's the barrelhouse for "Raleigh & Spencer", a prohibition era fiddle tune that's relentlessly entertaining. The band gets real props for their original read on "Cripple Creek", in a rendition that's vaguely reminiscent of the Grateful Dead's version, but has a more lyric feel.
The 23 String Band are a marketer's dream. Riding the high energy of youth, this finely tuned musical machine approaches traditional bluegrass with great reverence, but can also kick out the jams and update their sound to the minute. With the rise of Americana music as an over-arching pop form, it's a matter of time before a band from its ranks breaks out into pop-culture stardom. That band could easily be The 23 String Band, and Catch 23 could be just the vehicle to take them there.

Rating: 4.5 Stars (Out of 5)
Learn more about The 23 String Band at www.the23stringband.com or www.facebook.com/the23stringband.
Posted by Wildy at 7:12 AM