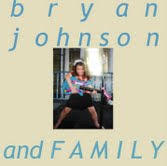 There’s a lot to be said for complex creations in rock and roll.  The intellectual crossroads of music theory, the raw energy of rock and roll, and the hubris to take an art form known for simple, recursive structure is an intriguing playground that can be wonderfully refreshing or disastrously awful.  Then again, there’s also a time to just let loose and have fun with the music.  That’s what Buffalo, New York-based Bryan Johnson And Family does best.  Their latest EP, The self-produced and self-released Bryan Johnson And Family, brings listeners back to the early days of rock and roll, when the biggest problems were simple heartache, and what to wear to the party this weekend.

Bryan Johnson And Family opens with "Beaches", a catchy little rocker that will have your toes tapping and a smile on your face. Ironically, "Beaches" is a forlorn love song in pure 1950's rock tradition. The Lo-Fi recording style has a period-feel that works well, although the vocal discipline in both the lead and the backing vocals is questionable, with pitch issues popping up throughout the song. "Cool Your Jets" gets stuck in the monochromatic melody of the choruses, but resolves well in the chorus. The song is catchy enough, but the chorus does wear a bit. "Deck Party" is a solid filler track, set firmly in the roots of 1950's rock. Bryan Johnson And Family overuses the catchy hook that is the basis of the song, but in a style consistent with pop songs of the era. "Doesn't Matter" has a wonderfully catchy chorus - radio worthy in almost any era of rock n roll. The recording quality/production here leaves a bit to be desired, but this has the potential to be a real hit. "Get Over" is a wonderfully is also virulent in nature. In spite of the sonic imperfections, Bryan Johnson And Family draws you in, and you're having fun before you know it. "Not Having Fun" is a solid, brief number about relationships and friends and the poor mixes they sometimes make. The song seems a bit out of place here, and is something of a discordant close to an otherwise consistent and enjoyable experience.

Bryan Johnson And Family brings a certain stripped-down charm to their self-titled EP, surfing the sounds and styles of 1950's rock and roll with a subtly modern edge. The songwriting is solid throughout, and even the sometimes questionable pitch in the vocals doesn't seem out of character with the period sound. Bryan Johnson And Family does suffer somewhat from low-end production values, a choice both artistic and necessity-driven from being an indie band with a very small budget, but the heart of rock and roll beats clearly in this deliciously rough hewn bit of ear candy.