Bess Rogers - Out Of The Ocean 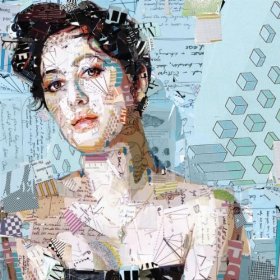 Some people write great melodies.  Others craft lyrics that leave you breathless.  There are even some in the music world who build arrangements that go beyond day-to-day to comprehension.  Any one of these talents can make an artist a household name.  Any two may well make them a legend.  On her prior EP, Bess Rogers Presents: Bess Rogers, we found an artist who showed flashes of these types of brilliance.  Fourteen months later, Rogers returns with Out Of The Ocean, making unbelievable strides as an artist, and transforming herself quickly from a singer/songwriter with big talent and tremendous potential into a maturing, brilliant artist you simply can’t ignore.

Rogers has built her reputation on several fronts.  The Brooklyn-based multi-instrumentalist has been involved in numerous projects over the years, playing nearly every style of music imaginable.  A few years back she was picked to be Ingrid Michaelson’s guitarist, and has earned a well-deserved reputation as a dynamic performer with a flair for the dramatic and the technical chops to back it all up.  Rogers began building her name as a solo performer through her web presence and technical savvy, but it’s the music that speaks for Rogers.

Out Of The Ocean opens with "One Step Free", the song snippet that gives the album its name. Rogers makes an impressive start here, although it may leave you wishing she'd finished the song. "Standing Tall" opens with a plaintive verse that resolves into a beautiful, lush and lustrous pop chorus. Roger's voice is pure ear candy for those with rich musical tastes, and she bends and shapes the melody line here like a true artist. The song itself is one of safety and confidence in love - a nice change of pace from the glut of starry-eyed pop songs and anguish filled navel gazing ballads that fill up the airwaves. "Weak Link" is an anachronistic invitation from one who views her own imperfections as the perfect complement to the object of her desires better qualities. There's a romantic, tongue-in-cheek element here that's charming, and the full, active arrangement makes it a pop gem.

Rogers bemoans the relegation of romance and attraction to chemical processes on "Math And Science", yet indicates a continued willingness to play her part. Rogers draws you in here with a chorus that simply will not get out of your head. "Anchor" goes up-tempo, running along at a gallop while Rogers keeps pace with a flawless vocal line. The melody line here is brilliant, and once again, Rogers will stay in head for days. Don't be surprised if this is a break out hit. Rogers slows things down a bit with "In The Waves", a utopian invitation from a mermaid to a broken man that parallels immersion in water and falling in love with artful delicacy. Rogers creates a gorgeous sonic landscape here with layered voices and synth over a sparse arrangement. The song closes in haunting fashion, fading away into the depths.
Water And Dirt" is another wonderfully catchy pop/rock rumination on love. Rogers plays with the theme of elements, and the almost hopeless part we play in the human dramas of love throughout the album, but here she creates a bit of musical and lyrical magic that's impossible to ignore. "The Fittest" is another example of the sort of diluvian, edgy pop that Rogers is capable of creating. The arrangement is beautiful and lush, but with a backbone as hard as iron. Rogers rocks out on "I'll Be Gone", throwing down the gauntlet in a relationship where the sharing is no longer equal. This is done not in angry tones, but in a driven melody with honest lyrics that are more intelligently questing than spiteful. "Second Chance" is the most stripped-down and personal of the offerings on Out Of The Ocean, showing off Rogers' voice in a more open arrangement that reveals its simple beauty in broad daylight. Similarly, "Brick By Brick" sticks to an unfettered musical formula, whereby Rogers explores the minutiae of relationships in affecting and intelligent imagery. Rogers builds the intensity of the arrangement back to where she started in a conveyance of the building process, before falling back to the simple strains of a guitar string that fades as if leaving a story in progress.
Bess Rogers showed herself to be a special talent with her debut EP, Bess Rogers Presents: Bess Rogers, but Out Of The Ocean is light years ahead of first effort, showing a fast-maturing talent for melody, lyrics and song construction, all wrapped up in a voice that resonates in your mind. Rogers shares the love of lush arrangements apparent in the work of Sarah McLachlan, as well as the willful, independent narrative lyrics found in Aimee Mann's work. This all comes together in a fashion that is comfortingly familiar yet excitingly original. Very quietly, and without warning, Bess Rogers will knock your socks off. Out Of The Ocean is a Wildy’s World Certified Desert Island Disc, and figures to be featured heavily in year-end lists.
Rating: 5 Stars (Out of 5)


Please note that the Amazon.com prices listed above are as of the posting date, and may have changed. Wildy's World is not responsible for price changes instituted by Amazon.com.

Check out with current tour-mate Allison Weiss in the first episode of "Van Jams", below:

I couldn't agree more! Bess is "Wildly" talented, and her voice does resonate in your mind. She's a delight on stage, and she DOES have the technical chops to back it all up. I LOVE this new album. I brought it on a recent road trip and the miles flew by as I sat enthralled in a dreamy melodic bliss. Money well spent.