Jason Waters - See This Through 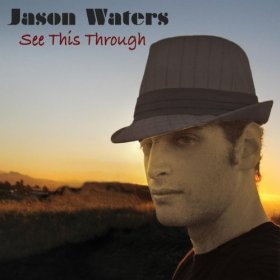 Jason Waters’ path as a songwriter has been shaped by everyone from the Beatles and Bob Dylan to Coldplay and Ray LaMontagne.  Emerging in the New York City singer/songwriter scene in 2005, Waters writes and plays with a style that, if not entirely original, shows a greater depth than generally found on top-40 radio.  Waters has gigged and recorded demos, but has never put out an official release, until now.  Waters ventures forth with his debut EP, See This Through, showing a 1980’s rock-inspired sound that has steeped in Americana.

Opening with "Late Night Telephone", Waters rocks out with a song of hopeful support. The
high-energy chorus is infectious, and the message is one to the heart. There's a definite 1980's aesthetic here that quickly gives way to the Americana rock of "Darkness Of The Day". Waters' easy vocal style is reminiscent of Tom Petty or later Springsteen, though his voice is his own. Waters shows off a bit more of his 1980's guitar rock muscle on "Ready To Fly", a solid, upbeat rock that's pleasing to the ear. Digging into the emotional depths, Waters finds "Honey Lips", a mid-tempo singer/songwriter style story-song. This mild tale is a solid album track, and leads into the philosophical love song "When I See This Through". The energy here runs a bit low, as Waters dwells in an almost non-committal melancholy that's partly convincing.

Jason Waters starts off strong on See This Through, and settles into a comfortable musical style that stands neither out nor down. There's a bit of Jakob Dylan in Waters' deep reflections and blend of straight-up America and, occasionally, 1980's rock. See This Through doesn't maintain the momentum that Waters sets sail with, but it's not a bad first step into the world of music.


Please note that the Amazon.com prices listed above are as of the posting date, and may have changed. Wildy's World is not responsible for price changes instituted by Amazon.com.
Posted by Wildy at 7:51 AM