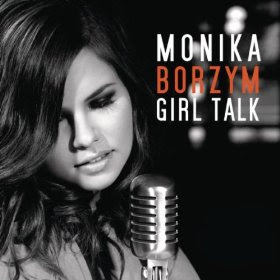 
Monika Borzym’s heroes have always been trumpeters:  Miles Davis, Chet Baker and Terrence Blanchard were her gateway into Jazz.  While there, Borzym was captivated by the divergent voices and styles of performers such as Ella Fitzgerald and Carmen McRae.  The Poland-born crooner studied in the United States at Miami’s Frost School of Music, furthering her love and knowledge of jazz and classical forms under teachers such as Lisanne Lyons, Larry Lapin, Ira Sullivan and Shelly Berg.   During her time at Frost, Borzym met guest lecturer Matt Pierson (Joshua Redman, Chick Corea, Pat Metheny), who is Borzym’s primary collaborator on her debut album, Girl Talk.


Borzym opens with a cover of Amy Winehouse’s "You Know I'm No Good", showing off a sweet and sultry voice that would be right at home in a 1930's gin joint. Monika Borzym delivers crisp lines with a polished presence that belies her 19 years, and her instrumental accompaniment is first class. "Extraordinary Machine" finds Borzym taking on a manic, talk-sing lyrical barrage in conjunction with a minimalist arrangement. The result is an intriguing tune that will leave you dizzy yet satisfied. "Even So" stands out from a string of exceptional performances, with Borzym imparting a mature presence and seasoned melancholy in dulcet tones that will have you quietly on the edge of your seat.


he opening cadence of "American Boy" (Estelle) carries vague suggestions of Jobim's "Girl From Ipanema". This is no retread, however, as Borzym launches into a modern jazz tune that remembers its classic heritage. Borzym digs into a 1970's singer/songwriter pastiche for "Field Below", which bears a vague musical resemblance to Procol Harum's "Whiter Shade Of Pale". The song is elegant and refined, with a gorgeous melody, and Borzym walks it home like a pro. “Appletree” (Erykah Badu) shows a more modern, soulful jazz sound. It feels as Borzym is a bit rushed by the arrangement here, but it all works out well in the end. "Down Here Below" (Abbey Lincoln) is a gorgeous, blue recitative that drips with regret. Borzym's voice is never lovelier, taking on a reserved air that is full of an eloquent and desolate beauty. "Gatekeeper" (Feist) is cut from similar cloth, but woven with more subtlety.


Borzym goes Vegas on "Dry Cleaner From Des Moines", a frenetic little tune that borders on the vestiges of bebop. "Abololo" (Marisa Monte) slows things down, with a tentative piano leading the way for Borzym's lush vocal line. "Possibly Maybe" (Bjork) is well intended, but becomes something of an undirected mess in spite of Borzym's attempts to save it. Girl Talk closes on a positive note with an unconventional cover of Pink's "Thank You" that is true to the original but puts Borzym's distinctive stamp on the song.


Monika Borzym has a captivating voice, and a presence that's bewildering in one so young. This is the sort of album you simply can’t put down; Borzym’s call is like that of a gentle Siren, relentlessly pulling you in.  Girl Talk is one introduction you won't soon forget, as Borzym appears poised to become one of the next big names in vocal jazz.